With every aspect of DJ culture generating more revenue than ever, it’s a good time to be behind the decks if you’re at the top of the food chain. A globe-trotting superstar like Tiesto can pull down as much as $20 million a year37 — a far cry from the post-recessionary rave years of the ’90s, when being underground was a badge of honor, but also meant that you had to scramble to make what you could just to cover the rent.

The reality is that the DJ pay scale varies widely.38 At one end of the spectrum, many DJs are willing to work for free just to get their foot in the door. On the other, superstar DJs earn more than $50,000 per night. But if you consider yourself a working DJ, and you’re spinning for five hours and making $300, does that really translate to $60 an hour? You may only be in the booth from 10 p.m. to 3 a.m., but the pre-party preparation that goes into DJing can be a full-time job by itself.

When you make the decision to commit to your dream of being a professional DJ, these are the key questions you need to ask yourself:

The expenses don’t even end there. Many DJs will spend hours networking and meeting with club managers or promoters every week. Others will travel long distances to gigs and pay the cost out of their own pocket.

Before you eagerly accept a low-paying gig just to get in a club’s good graces, consider the precedent you’re setting about cost and value of your time. If you work for cheap, you’re branding yourself to be booked for cheap in the future. Don’t sell yourself short; you’re an artist and you deserve to be paid for your talent. Research trends in your market and determine a fair market price, and don’t be afraid to ask for the money you deserve. With hard work, eventually you’ll get to the point where you’ll need to consider building a team of professionals around you.

Pros and Cons of DJing Full-time

The pros of being a full-time DJ are pretty clear. You’re getting paid to do something you love, and to play music and interact with fans on a regular basis. By DJing regularly, you can build up your chops and accumulate experience, with more opportunities to test new songs and new mixing techniques. You’ll also get to meet more people in the industry, which will help you establish a name for yourself and prove that you’re committed to your craft.

And then there are the cons. To pay the bills, you might have to accept gigs working at venues you don’t like, playing music you don’t want to play. You aren’t covered by medical insurance, so you’ll have to pay out-of-pocket expenses. Taxation is also tricky. Yes, you can write off a lot of your expenses as a small business owner, but you have to track receipts closely throughout the year. Since most of your gigs will not take taxes out of your income, you will likely have to pay a large lump sum in taxes at the end of the year. The best advice we can offer: be prepared to manage your finances wisely.

As the CEO of At Night Management, Ash Pournouri has shown he has the magic touch when it comes to helping his artists develop their careers. His highest-profile client is Grammy-nominated DJ Avicii (whose aliases also include Tim Berg and Tom Hangs). As one of the youngest DJs on the international dance music scene, Avicii is on track to become a legend. 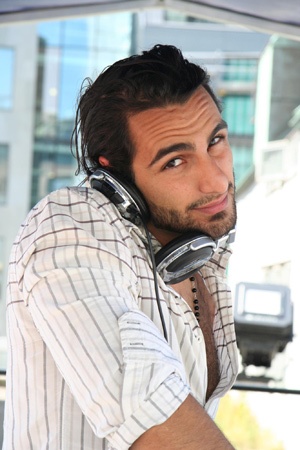 In this book, we cover the roles of different people in the music industry. Please tell us about your job. What kind of support do you offer Avicii?

Ash: I would say that Tim and I have a professional relationship that far exceeds the manager role. My services go beyond normal management in the sense that I get involved in every aspect of my artist’s life. Tim himself has referred to me as his second father, extra brother, friend, and mentor. I want what’s best for Tim’s talent, and that is to sometimes get involved when he’s stuck creatively to help him develop his sound. I take everything that doesn’t have to do with music production off his hands. It’s a lot of work for a manager, but we’ve proven that it works and that it can super-boost an artist’s career.

How did the two of you meet, and how did this partnership begin?

Ash: I found him on some blogs online. I was never looking for a client. I had no intention of being a manager. When I got in touch with him I was more or less curious about what I could offer creatively to help someone who I thought was talented but needed direction. We met, hit it off, tried some production work together–and the rest is history.

You’re part of a unique team: most managers are not closely involved in their artist’s careers. In your case, it looks like a 50/50 partnership. What do you see as a useful benefit of that?

Ash: It is more than a 50/50 partnership because I’ll do whatever I have to do to make sure my artist’s career progresses and rises to be the best it can be. However, the financial terms are that of any standard management deal, so I guess we were very lucky to find each other.

What do you think caused clubs’ demand for him to skyrocket?

Ash: First of all, I believe an artist has three legs of strategy that can be built up separately but make use of each other. One is music, one is performance, and one is brand/profile. They can all be monetized with the right strategy, and you can have unbalanced success in them too. I think everything we’ve accomplished is a milestone of its own in all those three legs, and we’ve pushed hard to make sure no leg is lagging.

At what point do you think a DJ can afford to hire a manager?

Ash: As soon as you decide you’re serious about a career in entertainment, you should look for a manager. A good manager will help create opportunities and sell your talent to the rest of the world. It’s never too early or too late for that! A manager takes a cut from your income, so essentially a good manager should MAKE you money, not the other way around. If that money is not being made, drop your manager fast.

Do You Need an Agent?

As Ash Pournouri points out, a manager takes a cut of your income–traditionally around 15 percent–so you need to take that into account if you’re just starting out. In the beginning, a manager will help you negotiate the best terms for your gigs, but once you reach a certain level of brand saturation in your market, the idea of hiring a booking agent to help you branch out into other markets might look like a reasonable prospect.

But before you even think about taking this step, it’s important to consider two basic questions: How does an agency make money, and how are you going to benefit the agency? For example, if an agent wants to make $50,000 per year, and takes a 10 percent cut from each DJ gig he books, he would need to book a DJ at least 500 times at $1000 per night just to make his gross annual salary (that’s before taxes). So put yourself in the agent’s shoes. Can you generate enough work to justify that business relationship?

Put simply, an agency is probably not the way to go unless you have the potential to secure global bookings. You don’t need an agent’s help if you’re just playing in one city. Agents only come into play when you’re negotiating with big clubs, in multiple cities.

So how do you make it without having a huge agency like AM Only behind you? One way to improve your chances of getting booked is to network with the general managers at clubs. You want to let them know you’re a professional, and you’re available. If you make a good impression, and if they ever need you at the last minute (which happens more often than you might think on the club circuit), you’ll get the call, and then you’re on your way.

Next: Where to Go From Here