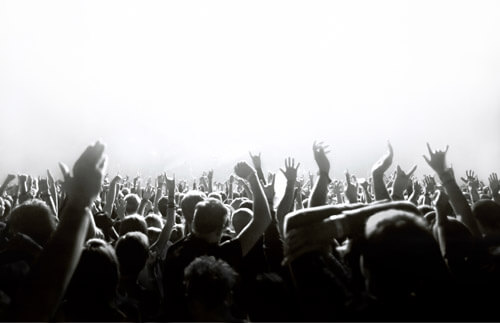 In any DJ set, ebb and flow is crucial. When you move from the ambient minimalist soundscapes of techno artists like Richie Hawtin to the banging walls of sound generated by Daft Punk or the Chemical Brothers, it’s important to be aware of the change in mood and atmosphere you’re demanding of your listeners. Transporting a crowd to dizzy heights and then bringing everyone down for a breather is an essential skill, and it’s all about energy control.

Tempo (Italian for “time”) tells us how fast a piece of music is being played or should be played. It’s usually measured in beats per minute (BPM) and has a strong effect on how the mood of a particular piece of music comes across. The faster the tempo, presumably, the more emotion and urgency you’re directing at the dance floor.

But rhythm is about more than just beats and tempo. Ideally, you want people to groove to your music for as long as possible, but you don’t want to wear them out. Along those lines, we like to think of rhythm as a landscape with peaks and valleys. At the peaks, you’re telling your audience when to get excited; at the valleys, you’re giving them a chance to breathe. The best DJs use rhythm in this way to their advantage. Whether they’re dropping in a banging percussive break during a peak, or scaling back to a lone four-on-the-floor kick during a valley, they’re always thinking about managing the energy level and rhythmic flow of their set.

In Search of the Perfect Flow

Good timing is the magic that keeps people dancing. It’s great to know how to beatmatch without the aid of computer software, but phrase-matching is actually a more important DJ skill. As we mentioned in Chapter 3, understanding phrasing helps you know when to start mixing out of the track you’re playing and into a new one, so your mix sounds seamless.

Dance music is generally produced in groups or phrases of 32 beats. You’ll typically hear a new musical element at the beginning of each phrase. Again, it’s important to listen carefully and actively to identify the elements of each song you’re mixing. You should almost always start a new song at the beginning of a phrase in the outgoing track. Train your ears to recognize a new phrase, and you’ll know when to start the mix.

Hip-hop and pop songs often use shorter phrasing, with only an 8-beat or 16-beat intro section. You can either wait until there are only 8 or 16 beats left in the phrase of the outgoing track to begin your mix, or you can loop the intro of the track you are bringing in, to give yourself more time to extend the mix.

In general, it’s a good idea to mix out of the chorus so the crowd hears the most familiar part of the song, and then continue your momentum into the next track. The first verse of your new song should start as the chorus of the outgoing track is ending or fading, so that your mixes feel natural and blend seamlessly together. If you don’t pay attention to the overall phrasing, you run the risk of your mix sounding awkward and forced.

Keep in mind that the song’s producers likely had a good idea of when to introduce the breakdown, so try to think about the space between, and don’t eliminate any relaxation elements in the song. It’s smart to avoid overlaying a beat on the breakdown; if you keep this section melodic (and free of sonic textures like white noise, synth washes, bleeps and so on), this gives people room to breathe. Even if you’re playing minimal house music, try to play breakdowns with some melody.

The most basic use of phrasing is to mix the intro of one track over the outro of another track. Let’s give it a try with a sample mix using the following tracks:

If you let “Pressure” play all the way through until the 64-beat outro, and then begin to mix in the 64-beat intro of “Turn It Down,” this is what the waveforms look like: 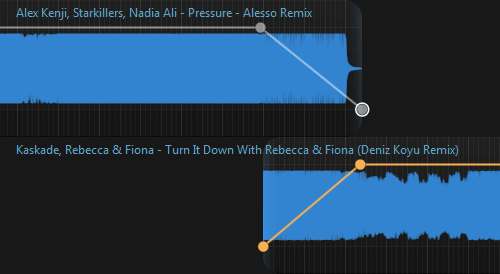 Mixing intros over outros is the simplest mix you can do. On the plus side, it’s fairly easy and straightforward. The down side is that you’re playing the full six minutes of each track, so your crowd might start to get bored.

One solution to the down side is to use phrasing to mix the beats together at an earlier portion of the song. Notice below that we didn’t mix over the melodic breakdown of “Pressure,” but let the chorus play through twice before beginning the mix.

All we did here was to shorten the length of our first track. Since dance music is almost always written in 32-beat phrases, you can feel confident that the melody of “Turn It Down” will be timed to begin immediately after you have fully mixed out of “Pressure.”

Besides beatmatching songs by tempo, you can match specific elements in a song, provided they’re in the same key. Many club tracks have similar vocal elements that you can mix and match. If two songs have a similar lead vocal or even similar lyrics, you can insert one vocal where the other leaves off.

If your track is an instrumental, you can also match drumming styles. Try mixing from a song with tribal elements or conga drums over another song with similar drums. This can create a real surge of excitement, because the mix is driven entirely by the rhythm.

The main thing, as always, is to consider the flow of the elements you’re mixing. Here are some quick tips on how to manage the intensity of a mix:

Syncing Your Beats in Perfect Phase

Sometimes you’ll hear a DJ beatmatch two songs perfectly, but the drums hit at slightly different times so there’s a small gap between them. Instead of a solid boom, the drums start to flam, creating a ba-boom sound. To a professional DJ, even a few milliseconds of this mismatch can sound obvious. The key to solving the problem is to phase your beats correctly.

To understand what phasing is, think about two ocean waves colliding with each other. Without getting too mathematical or scientific, the waves can either add up or cancel each other out as they pass through one another. This phenomenon is called superposition10 and phase cancellation.

To give you a visual example, the TV show The Deadliest Catch featured one of the only rogue waves (also called monster or abnormal waves) captured on video. A rogue wave occurs when the wave amplification between two smaller waves creates a wave that’s much higher than what you would normally see on the ocean. In Season 2, episode 4, one of the ships in the fleet took a rogue wave that caused the ship to list on its side.11

This same rogue wave phenomenon applies to audio waves. When two waves peak at the same time, they’re considered to be “in phase.” When the peaks occur at different times, they’re incoherent or “out of phase.” We can illustrate this with a few examples. 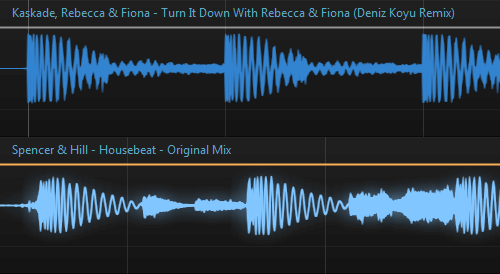 Songs at the same tempo, beatmatched and in phase (layered very close together, on the beat): 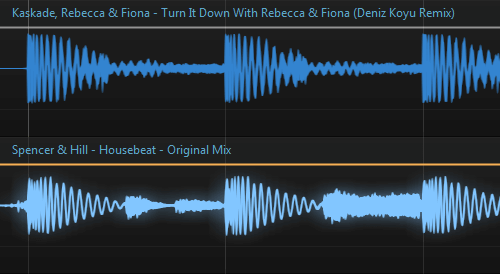 Songs at the same tempo, but out of phase: 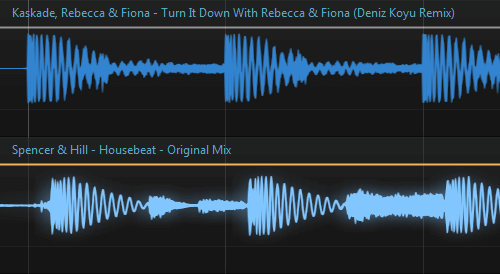 If you set up two copies of the same song and press play on both decks at the same time, chances are the two records won’t be exactly in phase. When the beat is off–if the phase is too wide–it will sound like the beats are galloping separately. As a visual reference, picture Olympic sprinters on a track and what their legs look like when they’re running at the same pace in perfect sync. Once they begin sprinting toward the finish line, when they’re no longer in sync, they’re “out of phase” with each other.

When the beats are very close to each other–if the phase is narrow but not quite perfect–you’ll hear weird effects like flanging or beat cancellation. Flanging sounds like a jet taking off, which is good if you want that audio effect, but not good if it happens unexpectedly. Even worse, with beat cancellation, your drums will suddenly disappear. You might also get a random beat amplification effect where the beat becomes twice as loud as any other part of the song. In other words, phasing can cause havoc.

Here are some visual examples. The red and blue waves display two similar waves that are out of phase. In the context of a DJ mix, this would cause confusion on the dance floor. Your audience needs to know which beat they are dancing to; bad phasing makes them stumble and lose the groove. 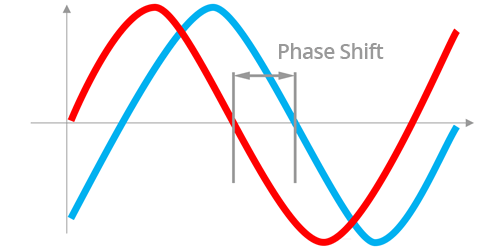 You can correct the problem by using the phase buttons in software like Traktor, or by nudging the platter on the CD deck. You know you’ve succeeded when it’s impossible to tell the beats apart.

Few people realize this, but the EQ knob for “bass/low” on your mixer was invented to help correct phase problems during mixing. You can’t mix two tracks together without using EQ because you usually run into wave amplification, which makes the bass too boomy. By removing the bass from one track, it makes the transition smoother.

Next: Find And Play Unique Tracks