2. How To Use Harmonic Mixing

Once you know the key of your music, you can start using that information to mix harmonically. The Camelot Wheel, invented by Mark Davis and part of Mixed In Key, is a color-coded system that helps you figure out which keys are compatible. Each key is assigned a code number from one to twelve, like the hours around a clock. The wheel is visually designed to help you learn harmonic mixing. Here’s what it looks like: 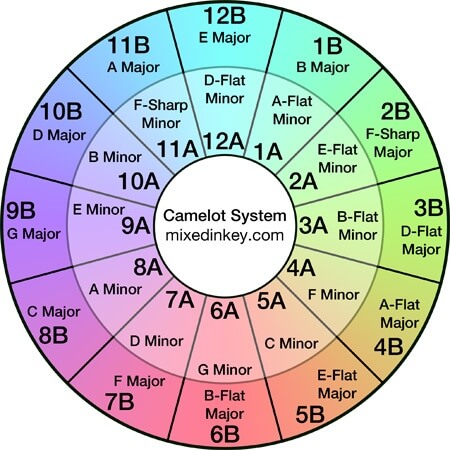 You can start experimenting as soon as you’ve labeled your first ten songs with a Camelot key code. The most basic trick is to try mixing two copies of the same song. If you load up two copies of Kaskade & deadmau5’s “Move For Me,” for example, and then mix them, they will beatmatch perfectly, and they’ll be in the same key, with the notes and harmonies in consonance.

You’ll notice the same thing when you start using harmonic mixing with two different songs in the same Camelot key code (let’s say 5A). Load up two songs and mix back and forth between them. That’s harmonic mixing in action, with the pitch and chords in harmony.

After you’ve tried mixing two songs in the same key code, try a mix that’s off-key. If you play a song in 5A and mix it into a song with a 10A key code, for example, you’ll notice the difference immediately. The clashing pitch between the two songs creates an uncomfortable dissonance.

Finally, try mixing two songs that are in different but harmonically compatible keys. It’s easy to determine a compatible key; for any key on the Camelot Wheel, the three immediately adjacent keys are compatible. So for example, let’s say you’ve started a mix with Kaskade’s “Angel On My Shoulder.” This song is in the key of A minor, which is 8A on the Camelot Wheel. That means you can mix it with any other track in 7A, 8A, 9A or 8B, and feel confident that the result will be a smooth harmonic transition. 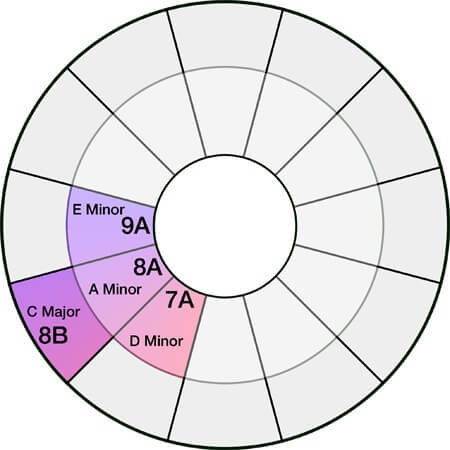 Interview with Mark Davis: Inventor of the Camelot Wheel

Mark Davis aimed to simplify the technique of harmonic mixing by making the relationships between different keys easier to remember. In January 2012, we asked him about the history of the harmonic mixing method.

Mark, what started the harmonic mixing movement in the 1980s?

Mark: When I started DJing during the 1970s disco craze, I quickly learned the importance of mixing skills. Extended versions made some tracks more mixable, especially when remix services such as Hot Tracks offered versions of hit songs with extended intro and outro segments. As DJs polished their beatmixing skills, however, those with musical sense soon found that certain mixes sounded poor no matter how tightly tracks were beatmatched. This dissonance inspired DJs to consider harmonic compatibility.

In 1986, a visionary named Stuart Soroka introduced the DJ world to the concept of harmonic mixing. He published Harmonic Keysmagazine in Key West, Florida, and rapidly expanded a subscriber base through advertising in DJ magazines such as Dance Music Report. The most advanced DJs of that period soon learned the value of mixing in key: It allowed them to complete the sonic tapestries they sought to create, but in which they had been thwarted by the realities of incompatible keys.2

Your Camelot idea changed DJing for the better. How did you get the inspiration for it?

Mark: It was difficult to memorize the Harmonic Keys Overlay Chart, which listed the four perfectly compatible keys for any given key. I had an epiphany in 1991, however, which revealed that the chart could also be displayed in a circle, like the face of a clock. If I assigned numbers to each key, then I wouldn’t have to memorize key relationships because finding compatible keys would be as easy as telling time. I named it the “Easymix System” and soon discovered that it was an improvement over the original 17th-century circle of fifths.

Is It Possible to Mix Harmonically Without Realizing It?

Chances are you’ve probably mixed harmonically before you even knew about the Camelot Wheel. There are 24 possible keys, so there’s a 1 in 24 chance that if you choose any two random songs, they will be in exactly the same key. Those are low odds, but it does happen. Out of curiosity, we did some original research and ran a simulation on 17,000 songs to see what the chances were of two songs being in the same key if chosen at random. The results confirmed what we had anticipated: for every 1 in 24 choices, or 4.16 percent of the time, the two songs were in the same key.

Instead of just taking a chance on your mix being harmonic, the Camelot system ensures that you’ll get a smooth transition every time.

To sum up, here’s how you can use the Camelot Wheel to guarantee that your mixes are harmonically correct:

2. Label your entire collection so you can see the Camelot key code for all the songs you play. (Mixed In Key does steps 1 and 2 for you.)

3. Every time you mix between songs in the same key, it’ll sound perfect. For example, when you mix a track in 5A into another track in 5A, this mix will always be in key.

4. For compatible mixes, think of the numbers on the Camelot Wheel like the hours on a clock. Go forward or backward one hour, and you’ll have a harmonically compatible mix. So if you’re in 5A, you can mix into 4A or 6A.

5. You can also change the letter but keep the same number, and your mix will still be compatible. For example, 5A can mix into 5B, and 5B can mix back into 5A. 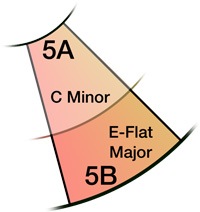 6. Any time you’re mixing, you have four possible compatible keys to choose from. You can stay in the same key, you can add or subtract one “hour,” or you can switch from A to B and from B to A.

We encourage you to try different Camelot combinations so you can become familiar with how the Camelot Wheel works. We’ve heard from many of the DJs we work with that this concept has changed the industry, because it makes their mixes sound incredibly musical. We think you’ll come to the same conclusion.

Extra tip: Since the Camelot Wheel is color-coded, we find it useful to remember that if the latest Axwell track is in the key of 10A, for example, its color code will be blue. When you remember the color code, it’s easier to remember which tracks will mix well together.

Next: Integrate Mixed In Key With Your DJ Gear