2. How to Use Harmonic Mixing

Are DJs really musicians? The debate has raged for so long, you could probably sample and loop that question and make a song out of it in response. Even the Foo Fighters’ Dave Grohl got into the act at the 2012 Grammy Awards, when he took a subtle swipe at DJs during his acceptance speech for Best Rock Performance. “Singing into a microphone and learning to play an instrument and learning to do your craft, that’s the most important thing for people to do,” he said. “It’s not about being perfect, it’s not about sounding absolutely correct, and it’s not about what goes on in a computer.”

What he forgot to mention is that for the last decade, technological advances in audio engineering have actually made it easier to learn your craft and pursue your dreams as a musician–even for a rocker like Dave Grohl. For this very reason, DJing has become more musically diverse as an art. When you hear BT or deadmau5 or Skrillex do a set, they’re not just playing records; they’re also dropping in synth lines, triggering effects, looping and manipulating beats–in short, they’re performing, and their DJ setup is their musical instrument.

If you want to get to this level, you have to begin somewhere. We’re convinced that a technique called harmonic mixing is a great place to start.

A Step Beyond Beatmatching

First, it helps to dig into a little history. To understand the roots of modern club DJing, you have to go back to New York City in the early ’70s. Francis Grasso was a DJ at the famed Sanctuary nightclub, where he would spin a mixture of funk, rock and soul hits by James Brown, the Doobie Brothers, the Supremes and the Jackson 5, to name just a few. Grasso was the first DJ to use headphones so he could hear the incoming selection on one turntable and, using a fader knob, blend it into the outgoing track on the other. Up until then, most DJs were just playing one song after the next, without mixing them. “You couldn’t adjust speeds,” said Grasso. “You had to catch it at the right moment. There was no room for error, and you couldn’t play catch up.”1

He didn’t know it then, but Grasso had invented the modern-day art of beatmatching. Today, it’s one of the most basic techniques in a DJ’s repertoire. Like any skill, it takes practice to get it right. So once you’ve crossed that bridge, how can you take that knowledge a step further and bring some real musicality into your set?

This is where harmonic mixing comes in. When you’re in the middle of your set and playing one of your favorite tracks, sometimes you’ll find yourself searching through your music collection, trying to figure out the right thing to play next. Harmonic mixing can help you do it. It virtually guarantees that your next track will complement the one you’re playing, and that your mix will sound musically seamless.

It sounds like magic, but it’s a real DJ technique with roots in music theory, and it’s used by some of the world’s most popular DJs, including Above & Beyond, Armin van Buuren, David Guetta, Kaskade, Markus Schulz, Sasha, Swedish House Mafia and many more. If you already know how to DJ, you can start using harmonic mixing in a matter of minutes. It’s even a lot easier to learn than beatmatching.

What is Harmonic Mixing

Put simply, harmonic mixing helps ensure that your song transitions won’t clash, and it also opens up a wealth of possibilities for creative mixes.

What it’s not: a law of mixing. All rules are meant to be broken. Harmonic mixing isn’t a requirement to be a good DJ. It’s merely a useful technique to combine with the rest of your knowledge and skills.

There are three elements to harmonic mixing:

Harmonic mixing also doesn’t mean you’re mixing in the same key for the entire night; instead, it means you’re mixing two songs together that are harmonically compatible.

The good news is that with the software and hardware available today, it’s really easy to do. As you work with the technique and train your ear to know when a mix is working musically, you’ll find that it can pay huge dividends on the dance floor.

Thankfully, you don’t have to study music theory to learn harmonic mixing. All you really need to know is that virtually every song you play as a DJ is in a certain key. Key names always start with the name of the root note (such as “C”) and the scale (minor). The scales are usually minor or major, so you will see key names like “D flat minor” and “E major” throughout this book.

If you’re not already familiar with musical keys, it will take a little time for you to learn the basics. Even if you’re not trying to mix harmonically, you might get lucky if, for example, you’re mixing a solo lead vocal over a monophonic (single-note) synth line. But when you’re mixing chords over chords, involving clusters of notes, you can run into dissonance, and that’s a bad thing. When mixing harmonically, you want both songs to sound as though they could have been part of the same piece of music, with a transition that feels smooth and natural. There’s an art to doing it right, and when you pull it off, your audience will sense it.

Mixed In Key: Finding the Keys of Your Music

After years of watching DJs like Sasha and Paul van Dyk, Mixed In Key founder Yakov Vorobyev could tell that they were mixing harmonically. Their sets were always flawless, but it wasn’t obvious how they found the various keys their tracks were in. The common method was to use a piano to find a song’s key beforehand, and then label each piece of vinyl accordingly–a thankless and time-consuming grind.

As a DJ himself, Yakov was spinning several nights per week, and he used the piano method to label all his tracks. Mixed In Key software was conceived as a solution to this problem. Why do all this work by hand, when it was possible to analyze and catalogue your entire music library without ever touching a piano?

In 2006, Yakov created Mixed In Key 1.0, which analyzed music files to determine the key of each song in seconds. The software was launched as a digital download on Mixed In Key’s website. Since then, the software has been updated over 20 times; version 8.1 was released in 2017. 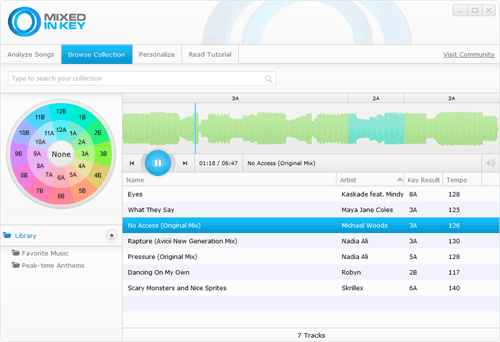 Mixed In Key is a DJ tool that makes it easy to explore your music collection and find songs in the same or compatible keys. It also tags their metadata, so the results will show up on all your favorite DJ software and hardware. For its ease and elegance, and for the time it has saved professional DJs, Mixed In Key has become the industry standard for harmonic mixing.

Next: Interview with Mark Davis