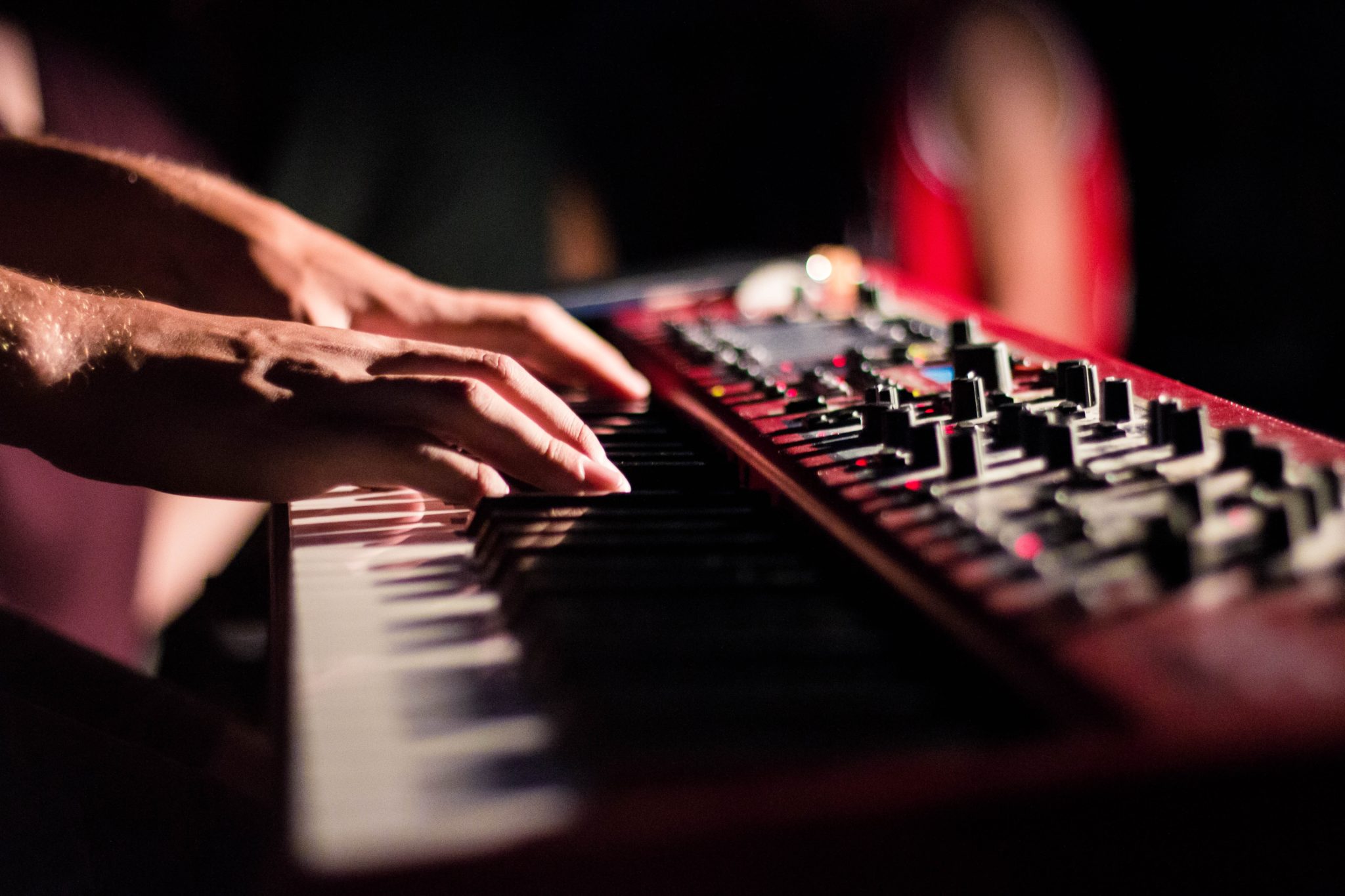 Chords are the building blocks of almost all music. They dictate the emotional and dramatic quality of a song, and act as a framework for the rest of the melody. But how do chord progressions work?

Learn the fundamentals of what chord progressions do, and how they work with our simple guide:

What is a chord progression?

If a chord is at least three notes played together, a chord progression is at least 2 chords played one after another. This sequence is usually repeated as a verse, chorus, or bridge.

A chord progression works by creating an emotional journey between its beginning and end. Much like a good book, it starts with an introduction, has an adventure in the middle, and resolves at the end.

It’s shaped by the key and scale of the song, which dictates the overall tone. After that, the first chord launches the piece, and the final chord is the resolution. What happens in between is down to the composer. Most modern songs have no more than 2 or 3 middle chords, which allows enough excitement while keeping things simple.

The choices that a composer makes acutely affects the emotional resonance of the chord progression. Changing one chord in the same sequence can make the sequence go from sad to happy, dark to light, or upbeat to gloomy.

Check out how these chord progressions work when small changes are made:

This chord arrangement is one of the most famous in history. It has just enough melancholy to avoid being schmaltzy, but it’s a clean and positive progression. Literally thousands of songs have used this exact chord progression!

Compare that to this one. By changing the middle chords, there is a distinctly unsettled, tense character to the progression. The first and last chords are unchanged, and yet the character of each sequence is markedly different.

The setup and resolution of chord progressions is crucial to how they work.

While the middle chords of a chord progression have huge significance on the overall sound, the first and last chords are even more important.

Imagine a movie – a good one always has a strong opening and memorable ending. Moreover, the beginning and ending need to make sense together. There needs to be a sense of satisfaction, a sense that the journey has come to an appropriate end.

Let’s imagine watching that movie. The story begins with a young woman, alone, hungry and cold on an alien planet. The narrative unfolds and she surmounts obstacles, learns new skills, finds love and defeats the evil aliens. Then, the final scene arrives, and she wakes up as if it was all just a dream. Is that satisfying? Or does the audience feel like they just wasted their time? This is a metaphor for chord progressions: They work better when they set up a nice resolution, and satisfy the listener.

This chord progression makes no sense. Listen to how jarring it feels as the progression loops. This is partly because the 1st and final chords don’t knit together with a pleasant harmony. There is also no root chord in the progression, which doesn’t help. It feels rootless, and discombobulating.

The setup of the I-V-vi-IV progression is ‘I’, with ‘IV’ as the resolution chord. It’s 3 steps in the scale. But what’s fascinating is the clip above, which makes no sense, is also a 3 bar gap between setup and resolution. Yet it doesn’t work because the gap between the 3rd and final chord is also 3 degrees, and the gap between the other chords is 2 degrees. That means a whole lot of jumping up and down between scale degrees, rather than a generally smooth motion. In addition, starting on a ‘iii’ chord is highly irregular, for good reason!

Key and scale makes a huge difference to how the chord progression works.

The exact same progression can sound wildly different when played in different keys and scales.

By transposing it to an obscure scale such as D Super Locrian, it is completely transformed. Much, much more sinister and foreboding!

Now compare that to the same progression, transposed to G Mixolydian. It’s returned to being a pleasant, inviting chord sequence. But this time it’s melancholy and plaintive.

As you can clearly hear, the key and scale of a song is massively important to the emotional quality of any chord progression. You can learn more about how the science behind transposition in our article How To Transpose Music.

However, In Captain Chords, you don’t need to understand the complex theory behind transposition. You can simply select any key, any scale and watch as the chord progression transposes like magic!

WATCH: Transposing into different scales transforms the character of the same chord progression.

Why do chord progressions get written in Roman Numerals?

Experimenting with key and scale allows you to find the perfect chord progression for your song!

Capital letter numerals represent Major chords, while small letters are for Minor chords. Different keys and scales have differing amounts of Minor or Major chords in the scale.

You can tell if the key is Minor or Major by the root chord, or ‘1’ chord. If it’s a capital ‘I’ it’s a major chord, for a major key. If it’s ‘i’ it’s a minor chord, and in a minor key. It gets a little more complicated in exotic scales, which are neither Major nor Minor. These are usually best left unexplored until you’re a litte more advanced, compositionally. But wait! Whith Captain Chords, you can use a huge range of scales that open up new chord combinations. You don’t even need to know deep music theory – simply try out new keys and scales and see what sounds good.

In Captain Chords, each key and scale brings up the relative scale degrees as easily selectable chords, making it super easy to add complementary chords to your chord progressions.

Chord progressions are a platform for the melodies, vocals and bass.

When you’ve created a chord progression that works, not only does it sound good on its own, it also opens up excellent melodic potential. This is because each chord has a number of notes within its palette. These are either chord tones – notes present in the chord itself – or nonchord tones. Nonchord tones spark a degree of tension against the chord in question. This can be powerful and exciting, but can quickly sound too tense. They’re best used with caution.

Because there are these chord and nonchord tones available in each chord, when you put chords together in a sequence there are suddenly multiple combinations of notes that you can use for melodies, basslines and vocals. Without chords to dictate the available notes, melodies can quickly unravel and lose impact. Chord progressions work to centre all the melodies in the song around the chords.

WATCH: This is demonstrated in the video below. Listen to how the melodies maintain a grounded relationship with each chord that it passes over.

Why we don’t go up and down the scale chord by chord.

We’ve looked at some chord progressions, used different scales and created a chord progression that works. Using Roman Numerals, we’ve experimented with one of the most successful chord progressions, I-V-vi-IV in a range of keys and scales, and tried out others such as I-ii-V-IV. But why don’t we just go straight up and down the scale degrees?

The answer is simple; it’s boring. A good melody works because it charts an adventure inside the key and scale, and a chord progression works by enticing and exciting. Keep it simple, yes – but not that simple!

Why we love chord progressions that work in an expected motion.

As humans, we’ve been raised to expect certain things in our music. For those raised on a diet of Western music, this means we feel discombobulated by music that shakes us around too much. The motion of a chord progression is key to its success. If it’s continually confounding our expectations, it will feel like an unpleasant car-ride on rough terrain. The listener will be unsettled, and probably want to turn the song off.

While the exact science behind what consitutes ‘expected motion’ is a more advanced topic, it boils down to how it makes the listener (and composer) feel. When the chords match the desired energy and emotion of the song, you have a chord progression that works!

Expanding on the basics.

There are an endless number of songs that centre around simple, common chord progressions, and use them brilliantly. You don’t need to reinvent the wheel to write a great song. However, expanding your compositional sphere by adding key changes and chord variations can be extremely rewarding, and help you come up with fresh ideas. By using suspended chords, 7ths or chords ‘borrowed’ from other scales, you can write exciting, innovative chord progressions. In Captain Plugins, this is super simple. Each key and scale comes pre-loaded with an array of less common chord variations and inversions which can turn a bog-standard chord sequence into a work of art.