Captain Melody Epic is a powerhouse for creating melodies.

It connects to Captain Chords Epic to create melodies that fit harmonically with your chord progression; and similar to the other Captain Plugins Epic flavors, Captain Melody Epic features sound presets powered by the award-winning PhasePlant. 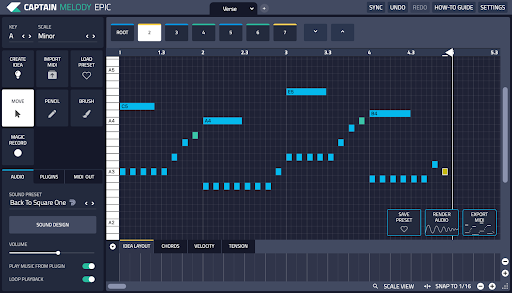 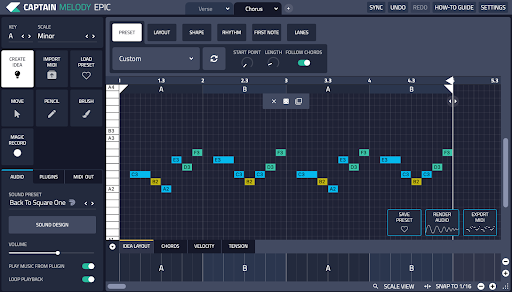 Since most of the features in Captain Melody Epic are also present in the other Captain Plugins Epic flavors, the Idea Tool is the feature we’ll focus on in this guide.

If you haven’t already done so, please read the Captain Chords Epic and then Captain Deep Epic how-to guides before this one.

The Idea Tool presents a structured way to write melodies. It breaks down a melody into its component parts, allowing you to consider each aspect of the melody. This includes rhythm, timing, steps, leaps, which notes in the scale are used or omitted, call and response and more!

It can automatically update with the click of a button to offer alternative melodies, lock certain notes you like and then only update the notes in the melody you don’t like. 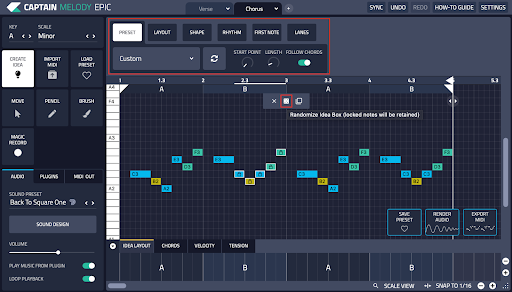 You can see, in the image above, there are lots of parameters to help you sculpt your melody which are spread across six tabs: Preset, Layout, Shape, Rhythm, First Note and Lanes.

Before we start learning about each control, we need to add an Idea Box to Captain Melody Epic’s canvas. The Idea Box is the area in which notes will be generated.

To add an Idea Box, select ‘Create Idea’ from the tools menu and then press the + button. 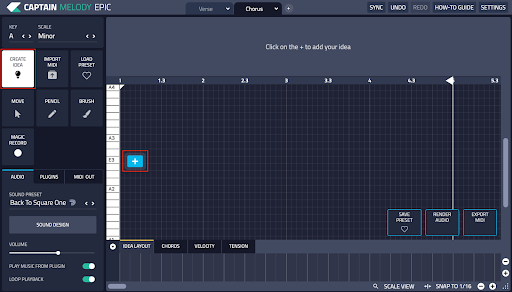 The Idea Box will automatically populate with notes. 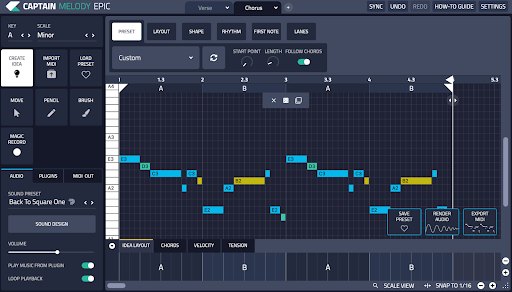 The preset tab gives you a selection of rhythm and timing presets, this is a great way to get started by finding something close to what you would like, or that fits with the rhythm of your chords and bassline.

You can also cycle through many variations by pressing the reload button and change the starting point and overall length of the melody. 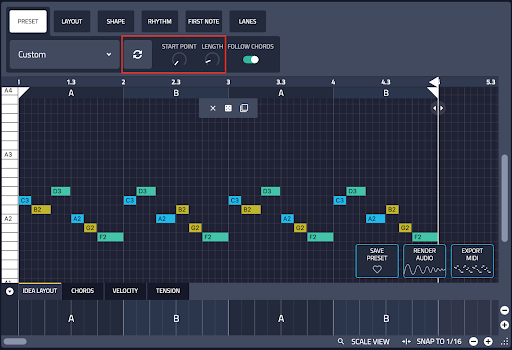 As you can see from the bottom Idea Layout tab, and also at the top of the canvas, the melody is now split into two sections, A and B. 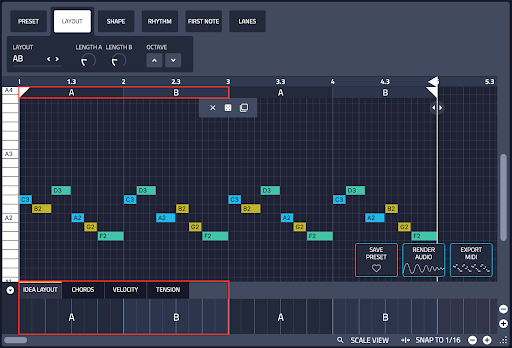 You could liken this to call and response.

You can choose the order of these sections from the Layout dropdown menu, this is a quick way to try out different melodic arrangements without having to drag notes around – which can be time consuming and uninspiring. 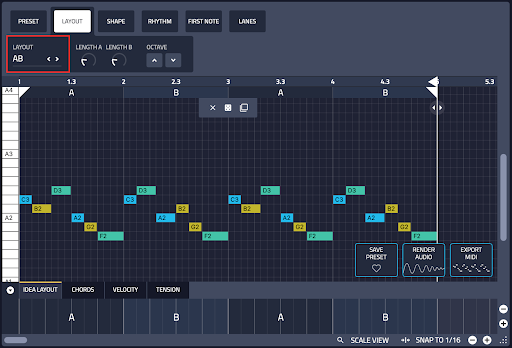 It’s also possible to change the size, in beats, of each section and their octave.

If you need more sections than A and B, create a new Idea Box and consider the A and B sections from the new Idea Box to be C and D.

You can repeat this as many times as you like, although normally A + B would suffice.

Shape allows you to control the amount of melodic steps between notes and the size of leaps. 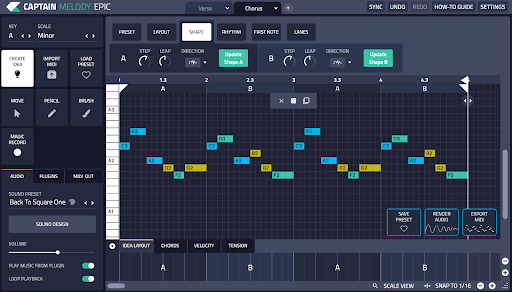 Steps are the distance between musical notes. For example, when looking at a piano or keyboard, going from A to B is considered a step. Going from E to F is a half step, or semitone, because they are directly next to each other with no note in-between. Going from C to C#, for example, is also a half step.

Leaps occur when the consecutive note played is more than a single step away. For example, in the key of A minor, if you moved from from A to D, that would be considered a Leap, that’s because you missed out two steps on the way, B and C.

If you set the Step and Leap parameters to zero for both sections, A and B, then all of the notes would be the same pitch. 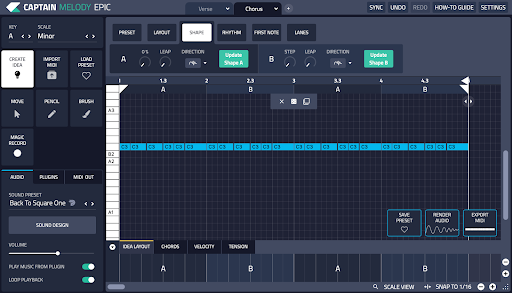 Adding more Leap increases the distance between each consecutive step. 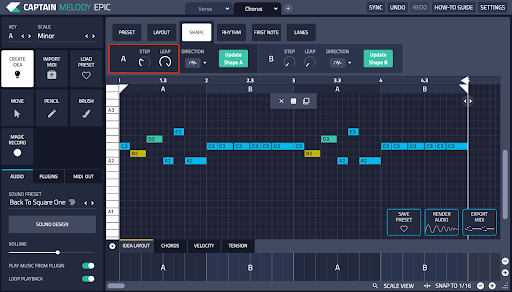 The Direction drop-down allows you to determine the motion of the melody, in terms of the pitch rising or falling. 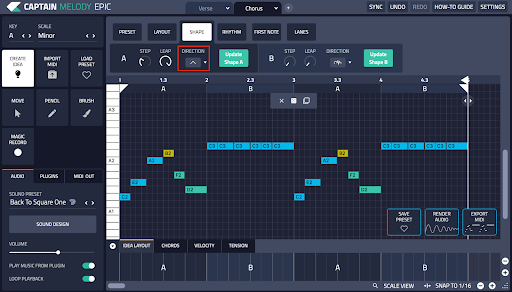 For example, the ‘Up and Down’ direction means the notes would rise in pitch and then fall down again.

Updating the Shape works great when used in conjunction with the Lock Notes feature. Lock notes by dragging a marquee box around them, you’ll see a padlock icon which you should click. Now press ‘Update Shape’ and you’ll see that only the unlocked notes are updated. 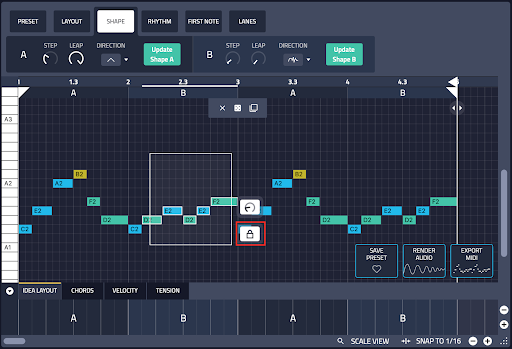 This is a great way to gradually dial-in a melody.

You can also change the direction of the unlocked notes, while the others are locked. 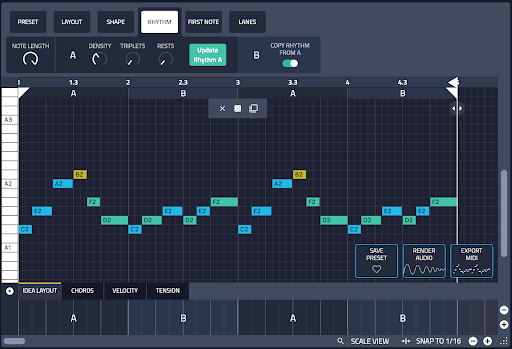 You can change the note density, length, amount of triplet notes and rests to further customize your melody. Or, for a more randomized change, based on the current settings, you can press Update.

On the B section, you have the same options as A, but also to copy the rhythm settings from A, for a speedy workflow.

The First note tab allows you to decide which scale degree section A or B should begin with. Scale degrees are the various notes that make up the Key and Scale, starting with the root note. 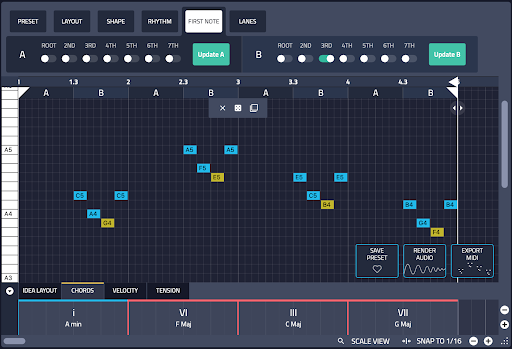 Think of lanes in Captain Melody like lanes on a highway. When you close a lane on a highway, all the cars have to go to a different lane. It’s the same with making melody notes and closing off certain scale degrees. 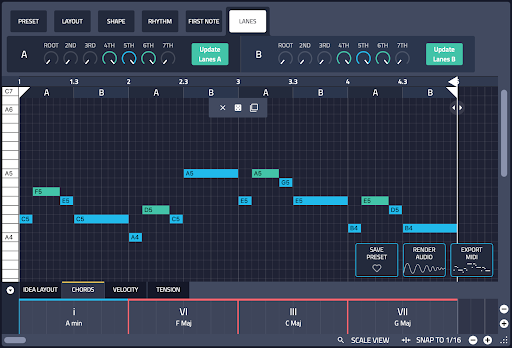 When you lower the chance of the 7th scale degree being used, you’re sending all the notes to a different scale degree. So this setting allows you to customize which scale degrees your melody will use, and not use.

A lot of melodies use 4th, 5th and 6th scale degrees, so try using only those notes for an interesting starting point for writing your melody.

In the middle of the Idea Box you’ll find the option to randomize the pattern. This can be used in conjunction with the lock notes feature, so that you are only updating the notes you’re not happy with. 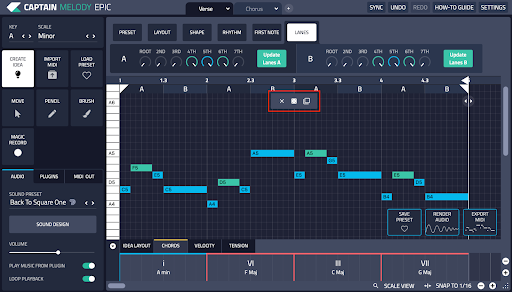 You can also duplicate the idea box for making longer melodic phrases or remove it completely to start again by pressing on the X button.

If you close an Idea Box, the notes will remain on the canvas for further editing outside of the Idea Tool’s control parameters.

That’s it, it’s now time to make some memorable melodies!

If you want to read the how-to-guides for the legacy Captain Chords 5, please visit this page.