The chord and key of C Minor (and how to use it in your songs).

It’s one of the most common chords in modern music and the root key of many smash-hit songs. Learn how to use the chord and key of C Minor with our guide! 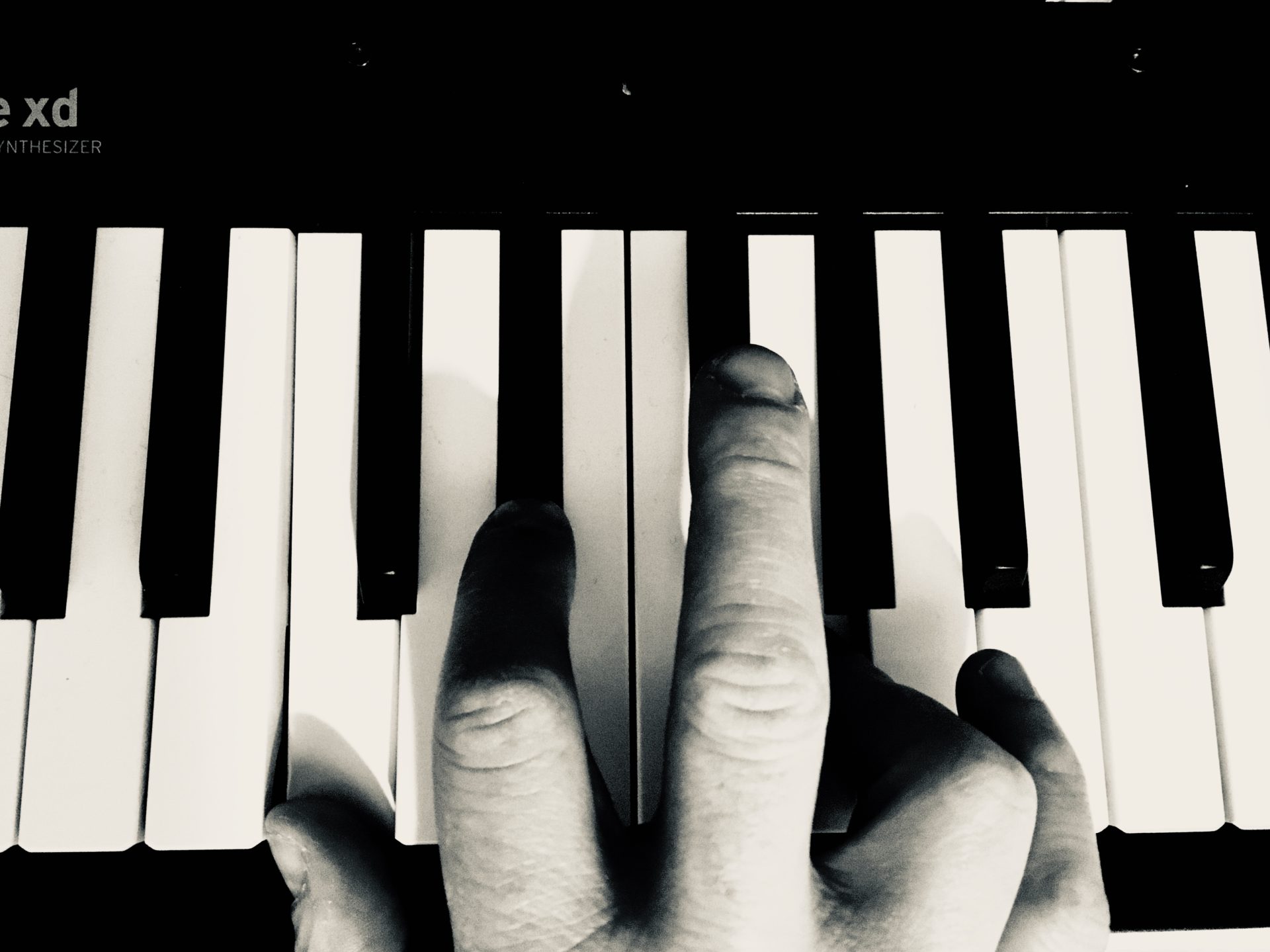 The basic triad of C Minor looks like this: 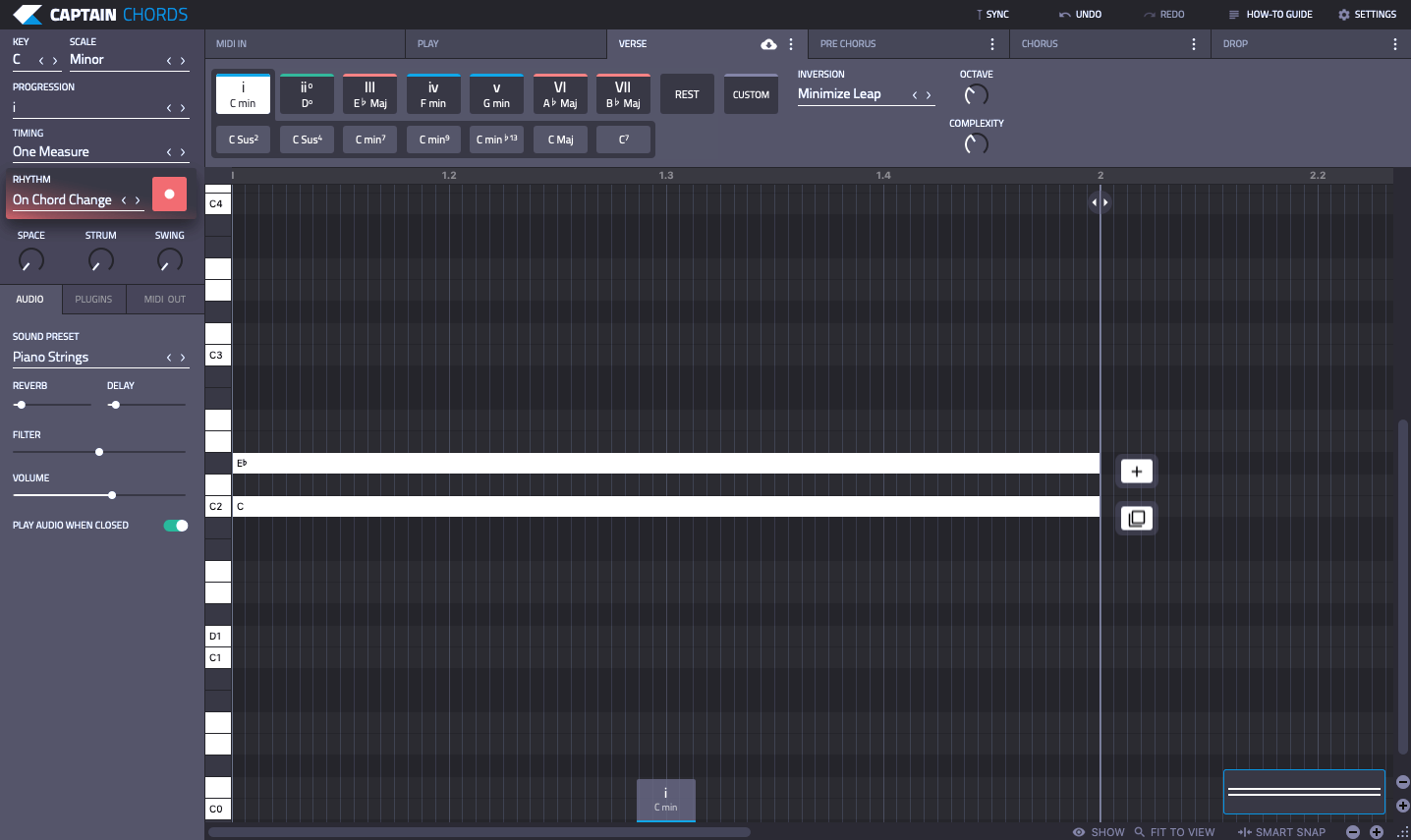 On a piano, a semi-tone step is simply a key up or down from the current key. So, we can count three keys up from C to reach the third – E Flat.

When playing from one chord to the next, we at Captain Plugins generally try and minimize the leap for a pianist. That means, we try and keep the distances between notes from chord to chord as low as possible. 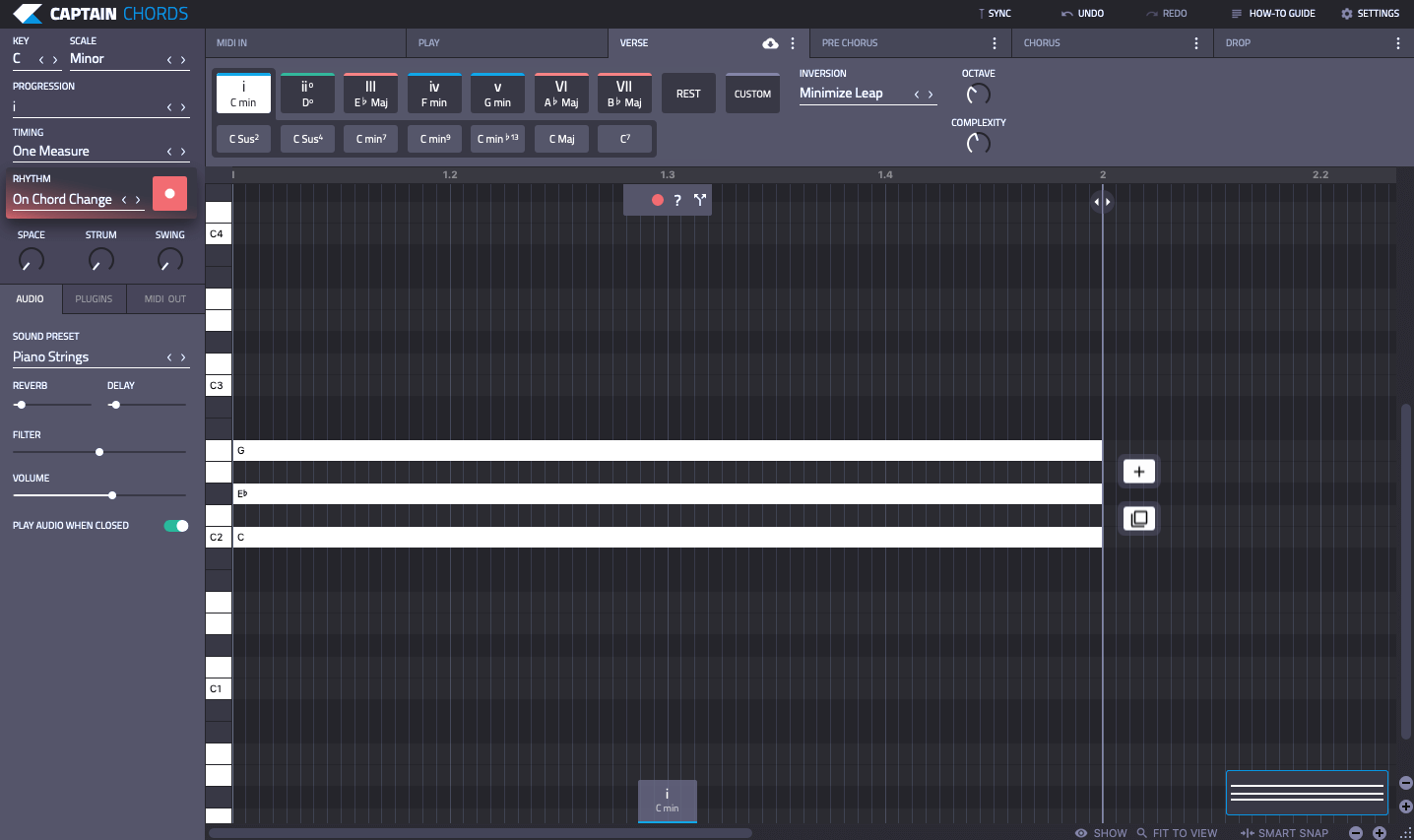 The middle note, or third, is what signifies whether a chord is Major or Minor. The 1st and 5th notes are the over-arching chord tones. Regardless of scale, the 1st and 5th together always signify which chord is being played. Here’s how they sound together in a standard C Minor chord: 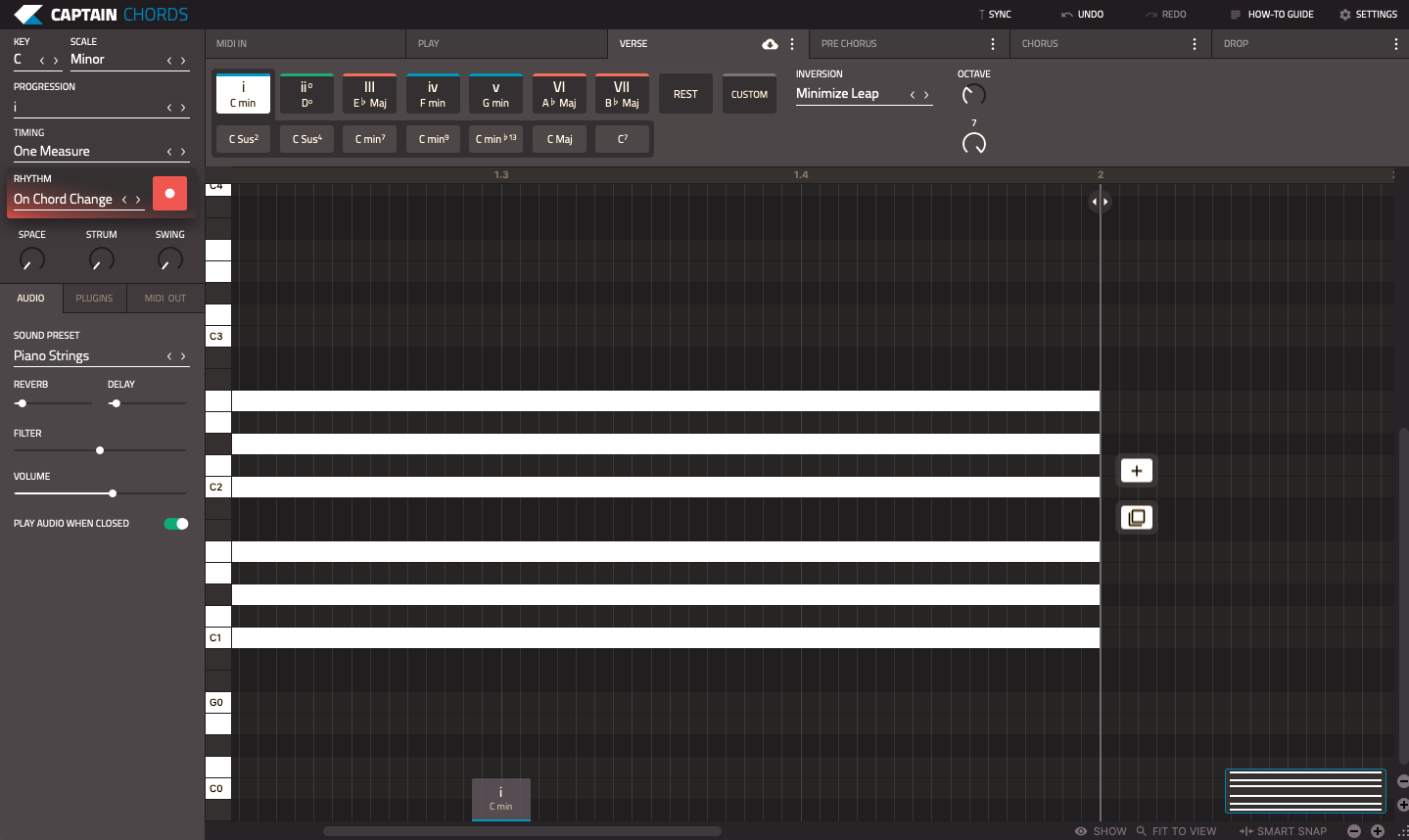 Adding more chord tones to the chord of C Minor is simply about repeating the triad notes in a higher or lower octave.

In Captain Chords, you can generate the chord of C Minor at the touch of a button. You can add complexity too, and even play C Minor (and all the chords in its scale) with one finger!

Remember that an octave is made up of 12 semitones? In the chord of C Minor, the fifth is G. G is 5 semitones down from C, and therefore 7 semitones up from it, too. The lower G is one whole octave below the higher one. 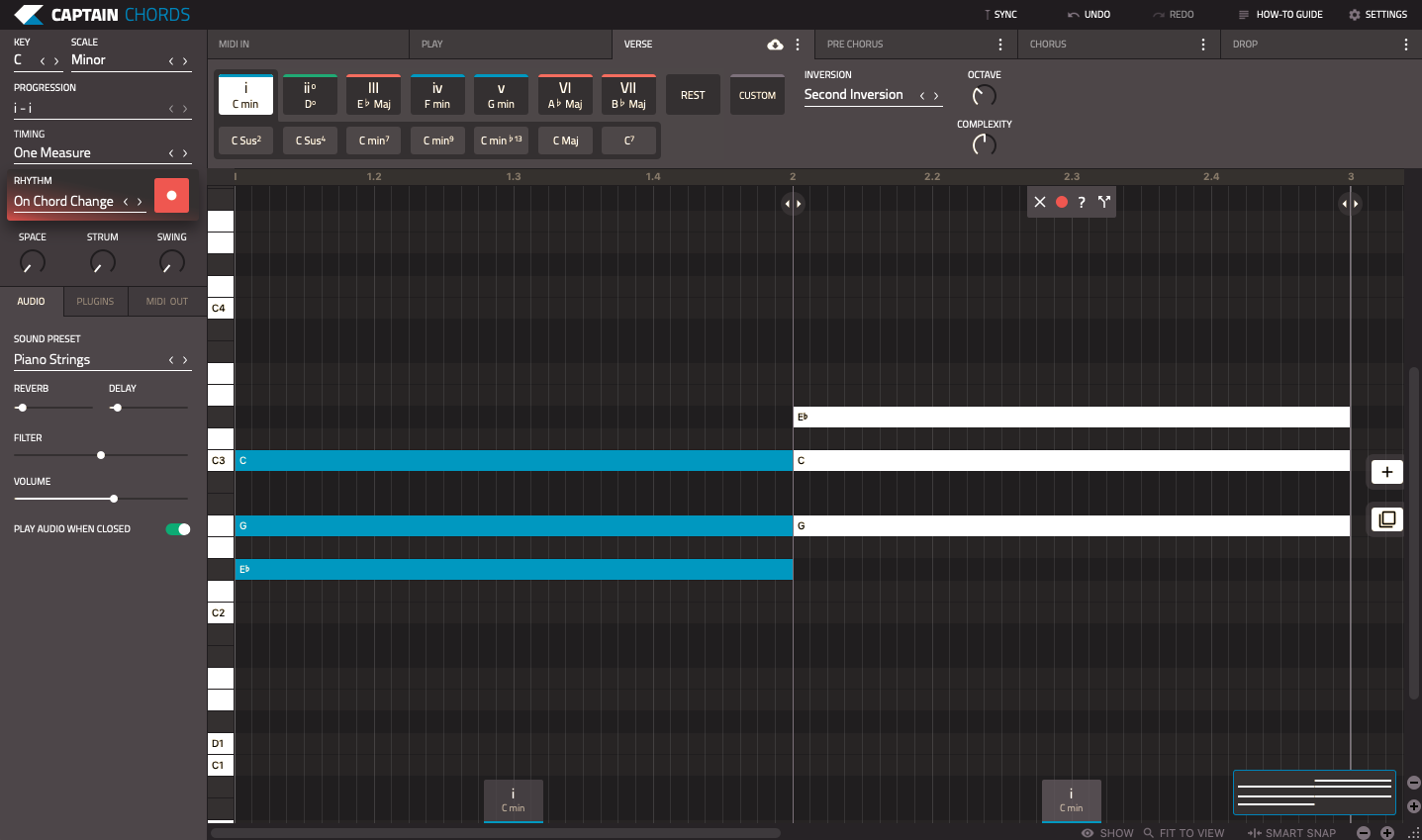 As discussed earlier, ‘inversions’ are ways of playing the same chord but with one or more of the same notes played in a different octave. This has the effect of changing which note is at the root of the chord. For this reason, we call it a ‘voicing’. In the image above, we can see the default triad, 1st inversion and 2nd inversion. The ‘voice leading’ each respective chord is C, G, Eb. Perhaps this is easier to understand in a simple chart:

Here are the two suspended chords of Cm played together:

Before we move onto the key of C Minor and how to work in it, a final word on 7th chords. It’s called a 7th, because it adds a note that is 7 notes from the root. For example, you can make a C Minor triad into a C Minor 7th by adding the note 7 notes above C to the Chord. A minor 7th interval is equal to 7 whole notes, which in C Minor is B♭.

There are three other types of 7th chord, created by either using a minor or major 7th note, or a major, minor or diminished root triad. For more information on this, check out our article on composing with 7th chords!

Other Flavors of C Minor. 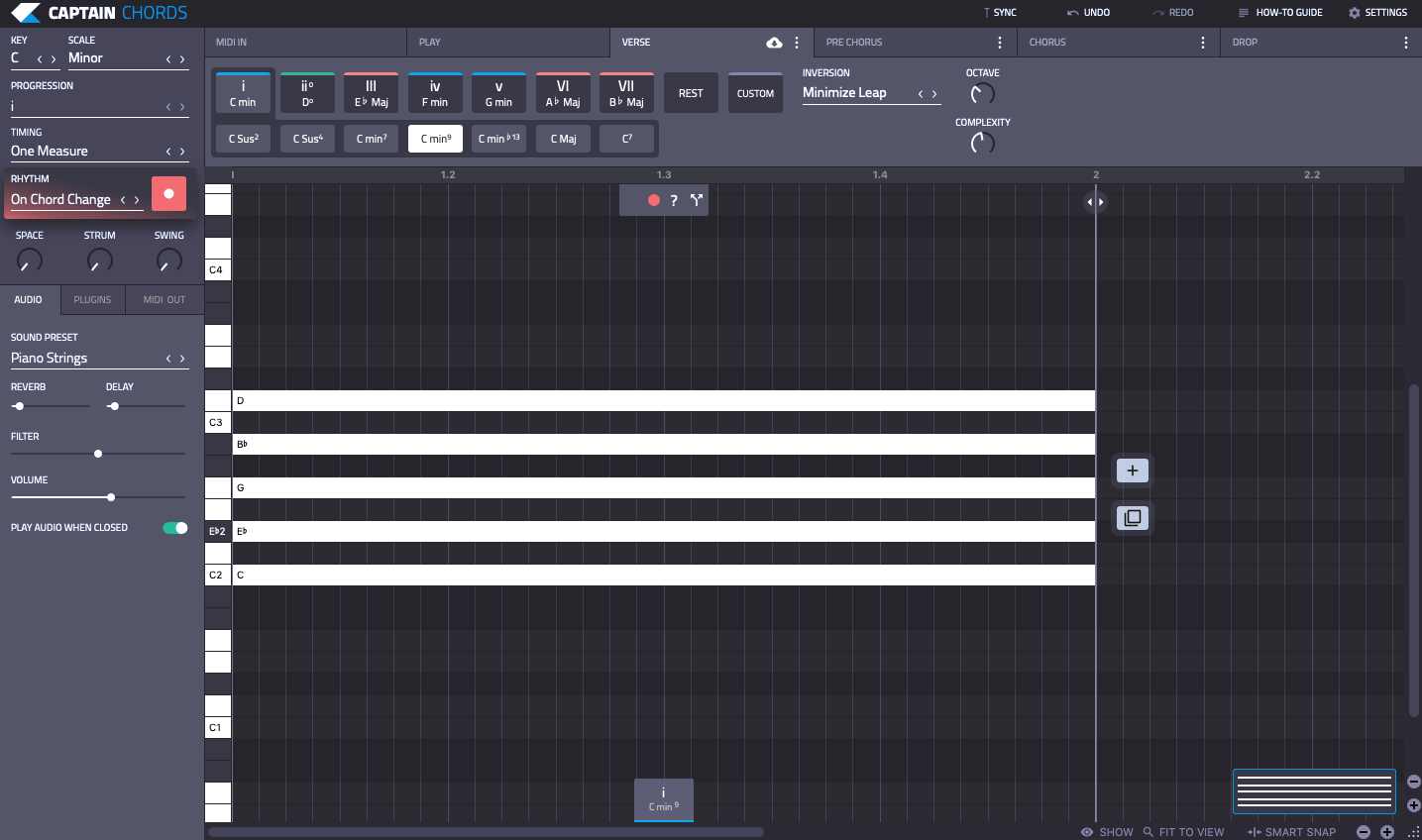 You can continue adding notes to the chord of C Minor. Many musicians call these new chord types ‘flavors’, or the adding of ‘Extensions’. Ultimately, these flavors occur when you add notes outside the ‘triad’ chord tones.

For example, a Cm9 chord is a C Minor 7th chord with another note added, 2 notes up from the 7th in the C Minor scale. So, it’s a Cm7 with an additional D♭:

Flavors are so powerful they can make a one-chord progression sound a lot more interesting:

With Captain Chords, it’s as simple as trying out different voicings from the chord options and seeing what you like!

The key of C Minor and how to use it.

We call these chords ‘scale degrees’ because they occupy a set position in relation to the root chord. For example, the scale degree 4, AKA ‘the fourth’ in C Minor is F Minor. There are 7 scale degrees in every diatonic scale.

Here’s how the chord palette looks in Captain Chords (with ‘Normal View’) selected: 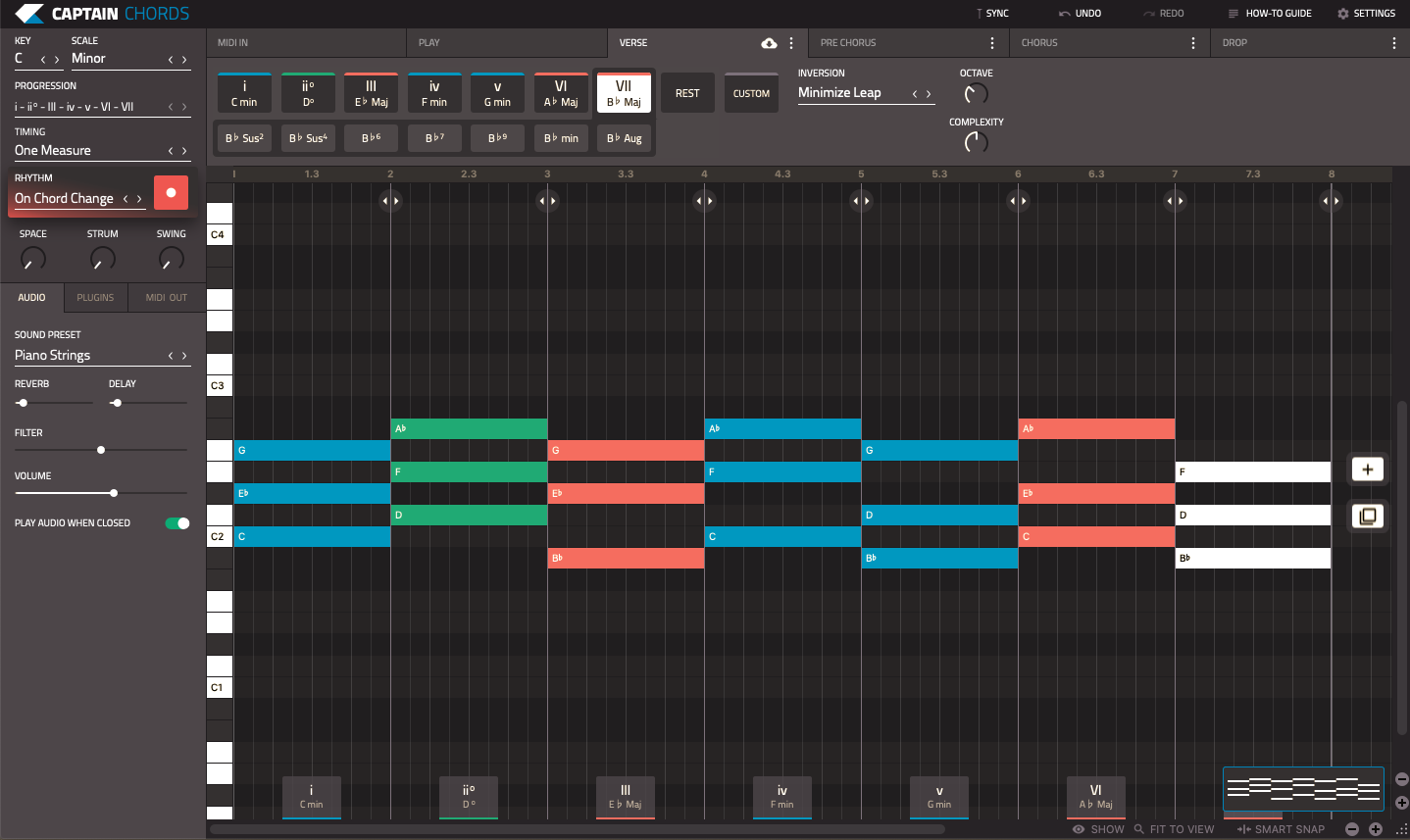 And here’s a chart of the diatonic scale of C Minor:

Now you know the rules of the diatonic scale of C Minor, you can break them!

In this jazz-funk song by Deodato, the chord progression is just 3 chords. Two are from the diatonic scale of D Minor, with a passing chord which is ‘borrowed’ from another scale. The chords are Dm, F, Fm. It doesn’t usually sound good mixing a minor and major of the same chord directly, but here it works because we always revert to the satisfying root, D Minor.

Explore the chord and scale of C Minor with Captain Plugins.