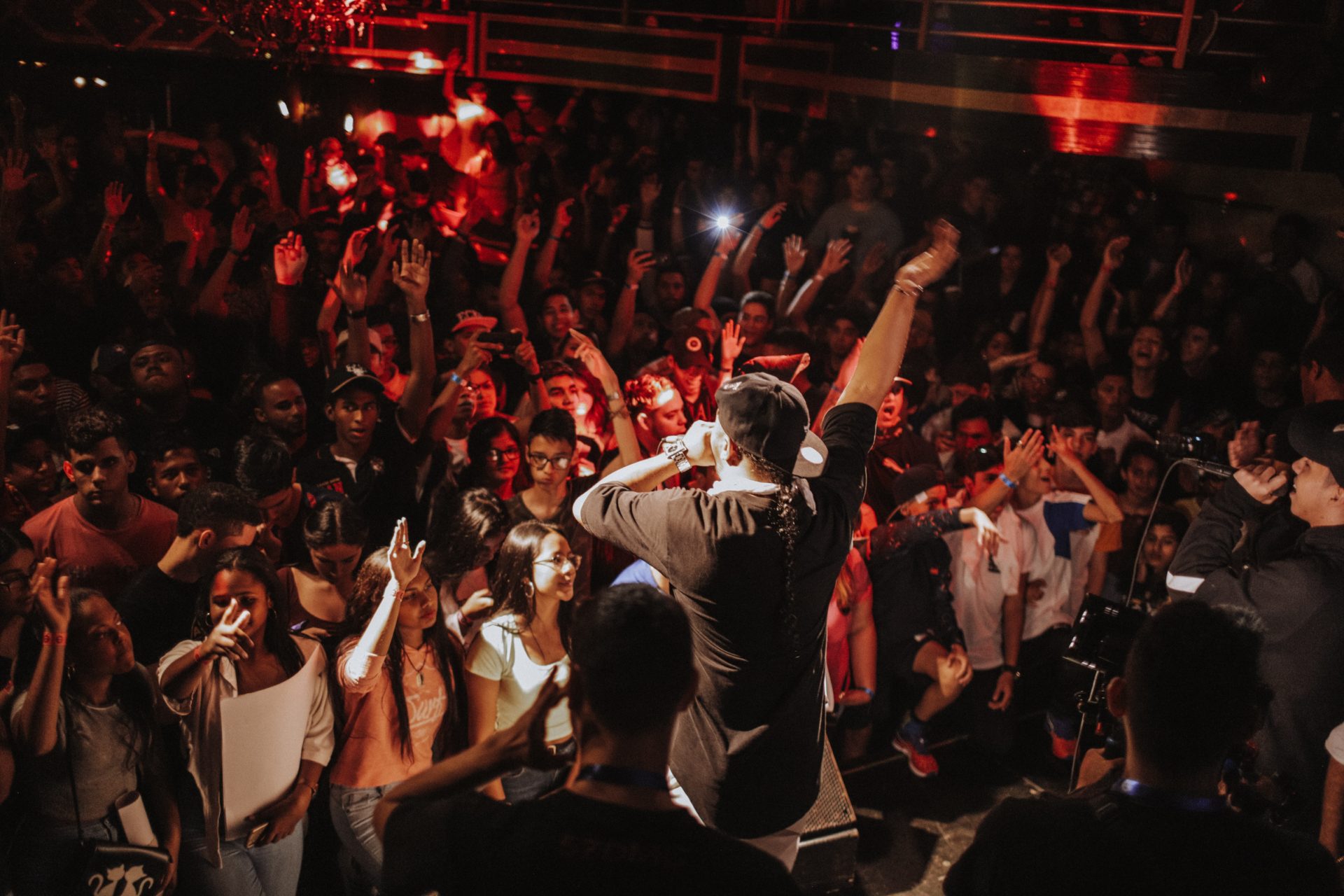 The influence of Trap music can be heard in many popular music genres. From Pop to EDM, Trap Beats are becoming commonplace.

Trap originated in the late nineties in Atlanta, Georgia. It was pioneered by artists such as Gucci Mane and Young Jeezy, with the term ‘Trap’ referring to the buildings where drugs were sold illegally.

The modern day genre features hi-hats which alternate between fast and slow rhythms, making use of 16T resolution – also known as triplets. Kick drums are sequenced in the style of Hip Hop, with heavy use of the Roland TR-808 drum machine, or samples of a similar timbre. The tempo can vary greatly and often makes use of half-time syncopation, while the overall mood is melancholic and dark.

Let’s look at how to create a Trap Beat in four simple steps using Captain Beat, Chords, Melody and Deep.

Dance to the beat of a different drum machine. 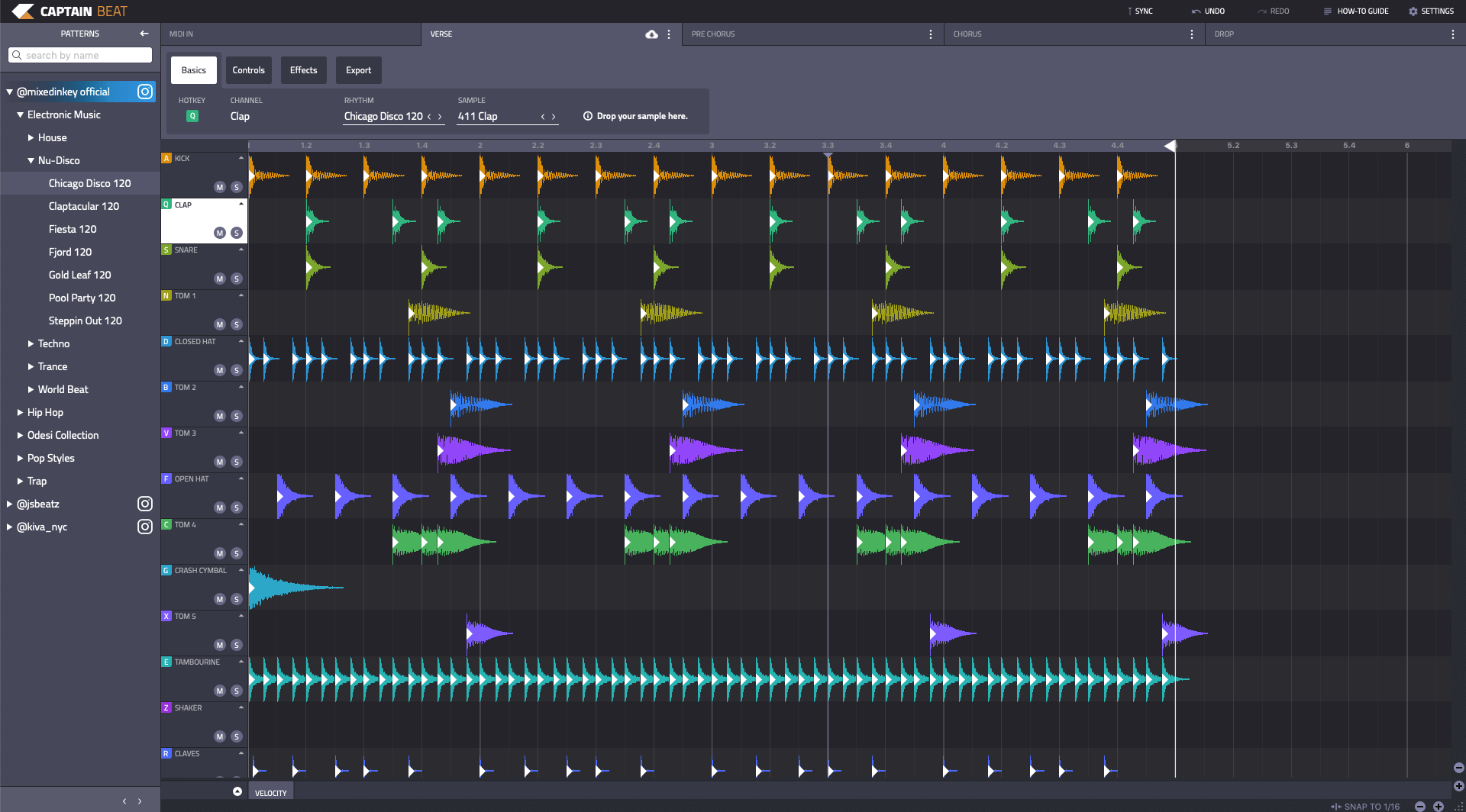 Let’s start by setting the tempo in our DAW. 140+ BPM is a good starting point for Trap, for this tutorial we’ll choose 145 BPM.

We don’t want the drums to be too busy, so we’ll use only a kick, clap, closed hat, open hat and tom – less is more!

Captain Beat has lots of cool Trap patterns built-in to help you get ideas flowing quickly. Although, for this tutorial we’ll create our own pattern and we’ll choose the drum kit called ‘Trappy Kit’.

When making Trap drums it’s important to tune some of the drum elements to match the other instruments. In this case we’ll tune our kick and tom to the note ‘E’ using Mixed In Key Studio Edition and the pitch controls in Captain Beat. The other drum sounds don’t need tuned, as they don’t have a definable pitch.

The completed Trap Beat will be in E minor, but you can use whichever key you want. Minor keys work well, as they have a more sombre vibe than Major keys.

Let’s start with the snare, placing it on counts 3, 7, 11 and 15 of the 4 bar loop. If you’re unsure how to figure out the placement, use your DAWs metronome to help count.

Next up is the kick, we’ll place that on the start of each bar and then some additional off-beat placements to give a Trap feel. Adding an extra kick on count 16 creates a double-beat as the loop retriggers, which adds a little punch to the drum loop.

The closed hat works well as a simple 1/8th note rhythm over the 4 bars. We can then make its rhythm more ‘Trappy’ with some triplet note placements.

To do this, set the grid snap to 1/16T and add 3 or 4 closed hats in a short-burst sequence. You can also miss out on one of the triplet notes to add a variation.

Where you place these bursts of triplet closed hats within the 4 bar loop is up to you, but we’ll put them at the end of bar 2 and before the clap in bar 4.

The open hat should occur once or twice over the 4 bar loop, let’s add it in once only, and swap it out with one of the closed hats. This will help to break up the closed hat rhythm and make it more interesting.

Finally, we can add some off-beat tuned tom hits to add a little more funk and tonality to the drum loop.

Here are the completed Trap drums (note that the 4 bar loop plays twice).

We’re working in E minor, so we can set Captain Chords accordingly. The choice of timbre preset is completely yours but something piano-esq is a good place to start.

We don’t want a complex progression for the chords, as this would make it less repetitive. Trap Beat instrumentals are usually quite repetitive, this works better for rapping over them.

We’ll opt for playing the tonic (E minor) chord repeatedly over the 4 bars with a half-measure rhythm. To make the chord progression a little more varied, we can alternate the chord voicing between ‘Default Triad’ and ‘First Inversion’ from the ‘Inversion’ drop-down menu. 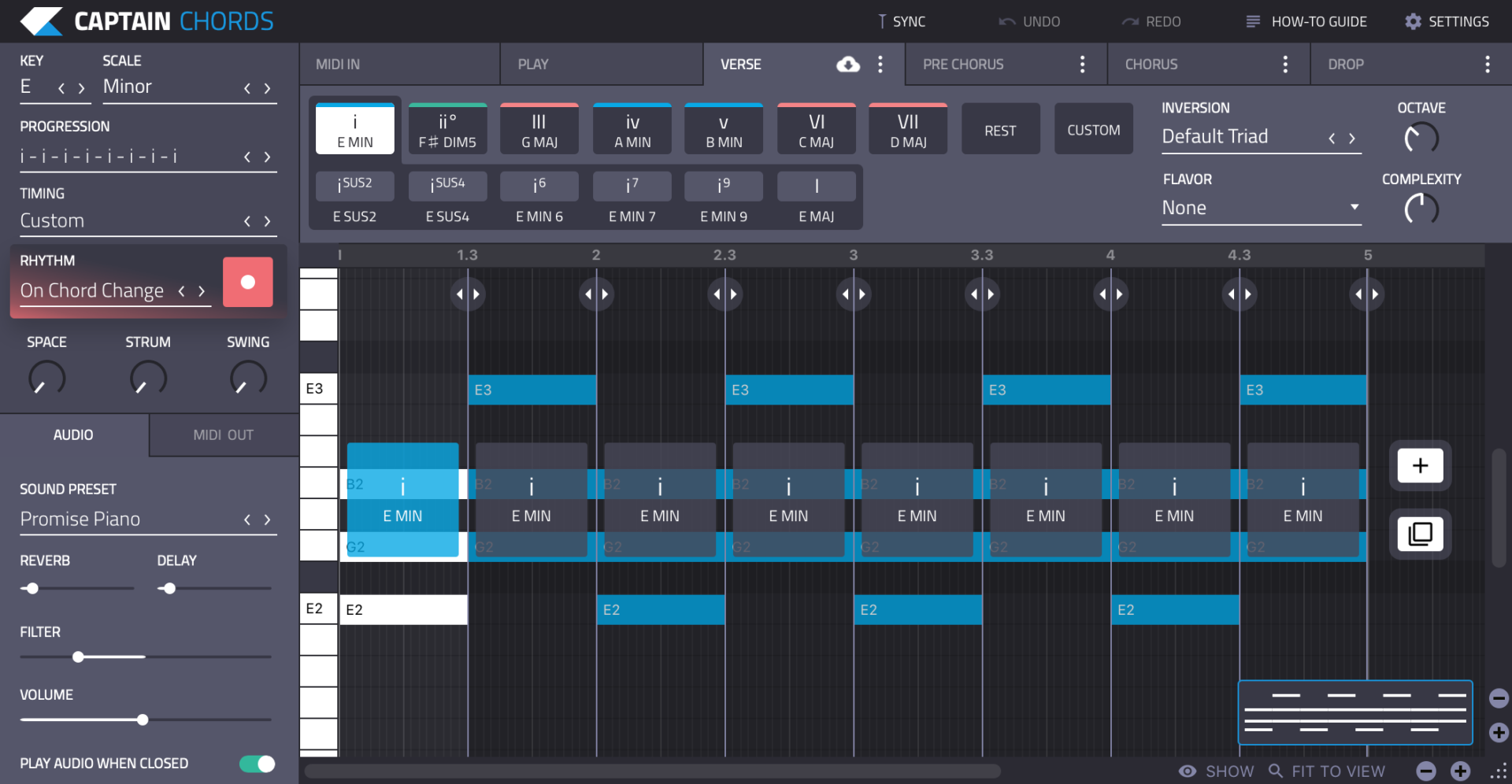 Create some space and sepearation between the chords and melody by adding a low-pass filter to the chords.

Here are our ‘Trappy’ chords.

Writing a simple arpeggiated melody with a 1/8th rhythm works great in Trap music. The instrument’s timbre is also something to consider. Bell sounds are a popular choice, especially when used on a higher octave.

Let’s use the preset ‘Analog Bell’.

We can use the chord notes and create an order starting on the perfect 5th ‘B’, followed by the same note an octave down, then the root note ‘E’ and finally the 3rd ‘G’. 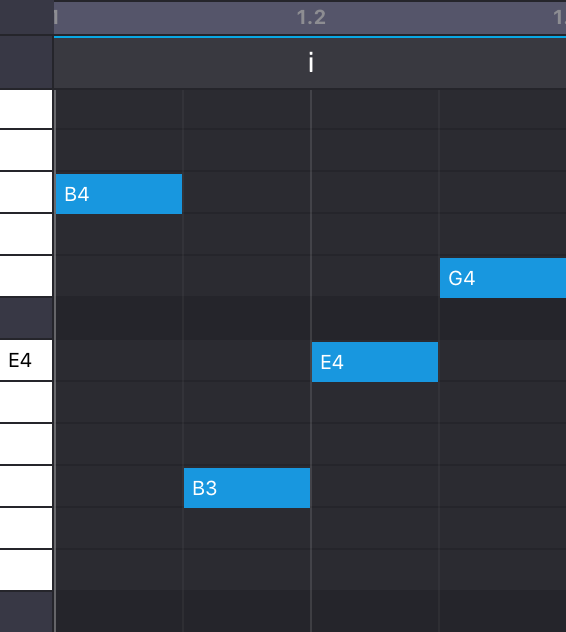 Copy and paste this ½ bar arp across the remainder of the 4 bars, and then we can move a couple of the arp’s top notes to non-chord notes to add some tension and variation. 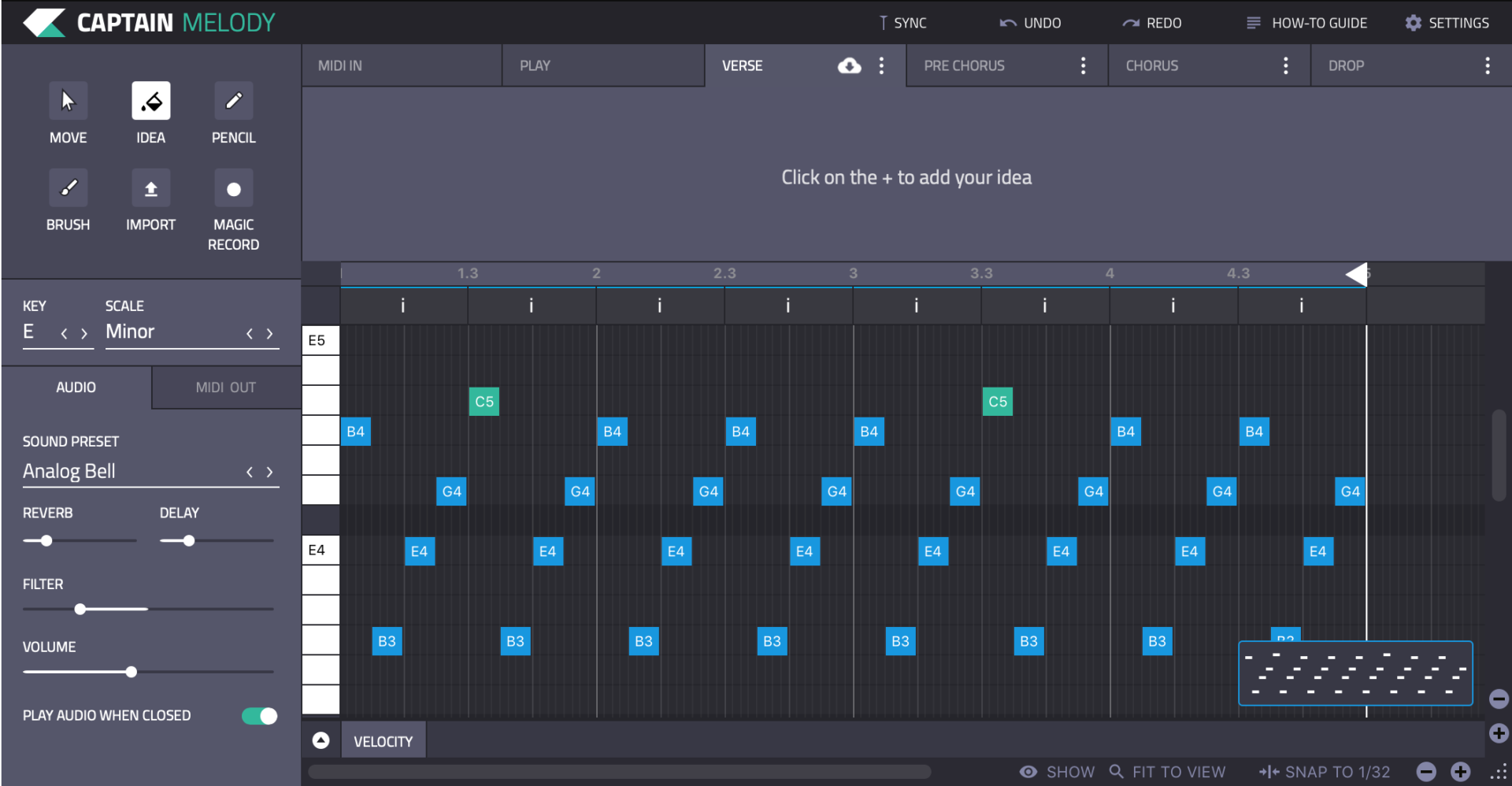 If you want to write your own Trap Beats, install our software called Captain Plugins.

Lastly, but by no means least, we’ll add an earth-shaking sub to give some weight and hip-shaking rumble. 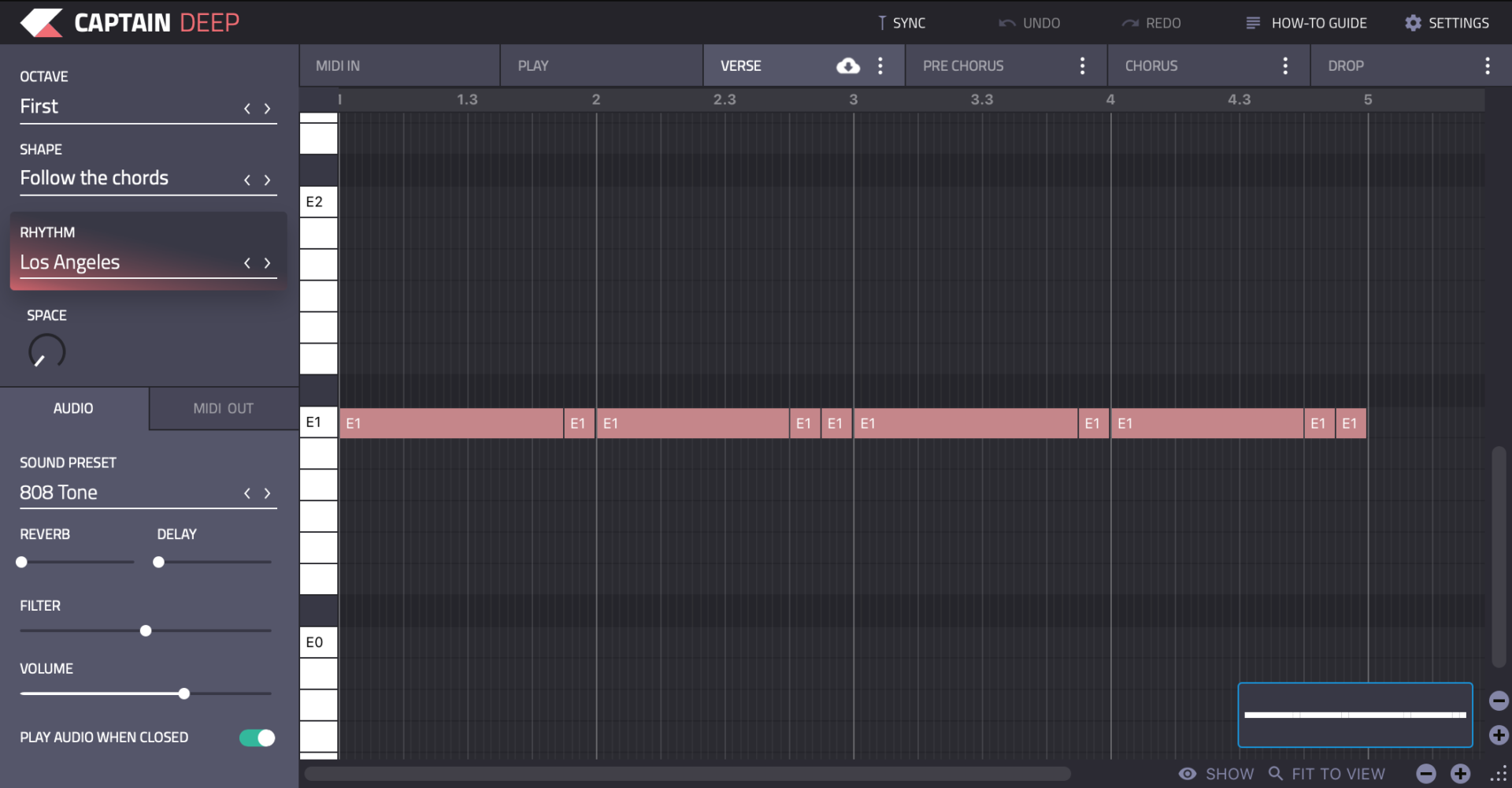 The first octave is a good choice for this particular sound preset.

There are lots of rhythm presets to choose from. We’ll audition them until we find one which has a rhythm that interacts nicely with the rest of the Trap Beat.

In this case we’ll go with ‘Los Angeles’.

Here’s our 808, you might need to listen in headphones, or speakers with a frequency response which goes down to 20/30hz to hear it.

We can then mix Captain Beat, Chords, Melody and Deep together to create our completed Trap Beat.

And here it is!

Now it’s your turn, try using some of these techniques and create your own Trap Beat!