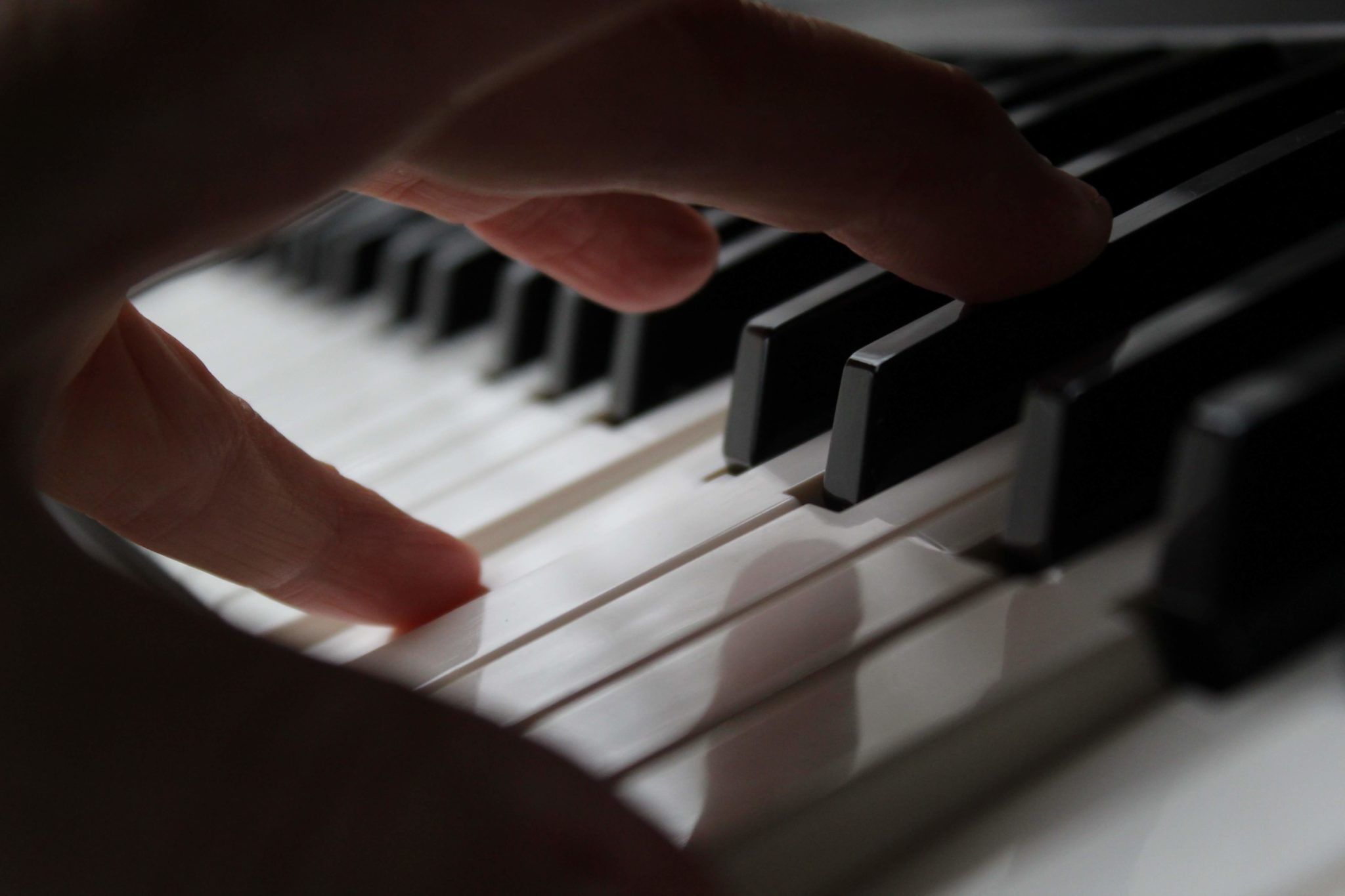 Photo by Anne Nygård on Unsplash

Throw any three notes together and you’ve got yourself a chord – simple, right? In truth, writing better chords is a tricky business. It takes some understanding of not only which notes might complement one another, but how different combinations of chords can alter the perceived mood of your track. Throwing in a couple of clever suspended chords might spice up your riff, but might also conflict with vocal melody. Play it safe with a repeated I-iv-v progression, and you’ll struggle to make your music stand out.

In this article, we will be exploring some of the best ways to improve your chords.

Daniel Hignell-Tully discusses some neat ways to write better chords in your own compositions.

We can all recognise a really good chord progression when we hear one. The driving simplicity of Eminem’s ‘Lose yourself’. Or AWOLNATION’s ‘Sail’. Perhaps the seductive groove of Stevie Wonders’ ‘Superstition’ or the staccato glory of Britney Spears’ ’Toxic’. In each instance, the chords seem to define the song, offering a rich world of harmonic possibilities that underpins the songwriters chosen mood, without interfering with or overtly dominating the composition as a whole.

Make your chords seve a function.

FIG A: ‘Steady As She Goes’ 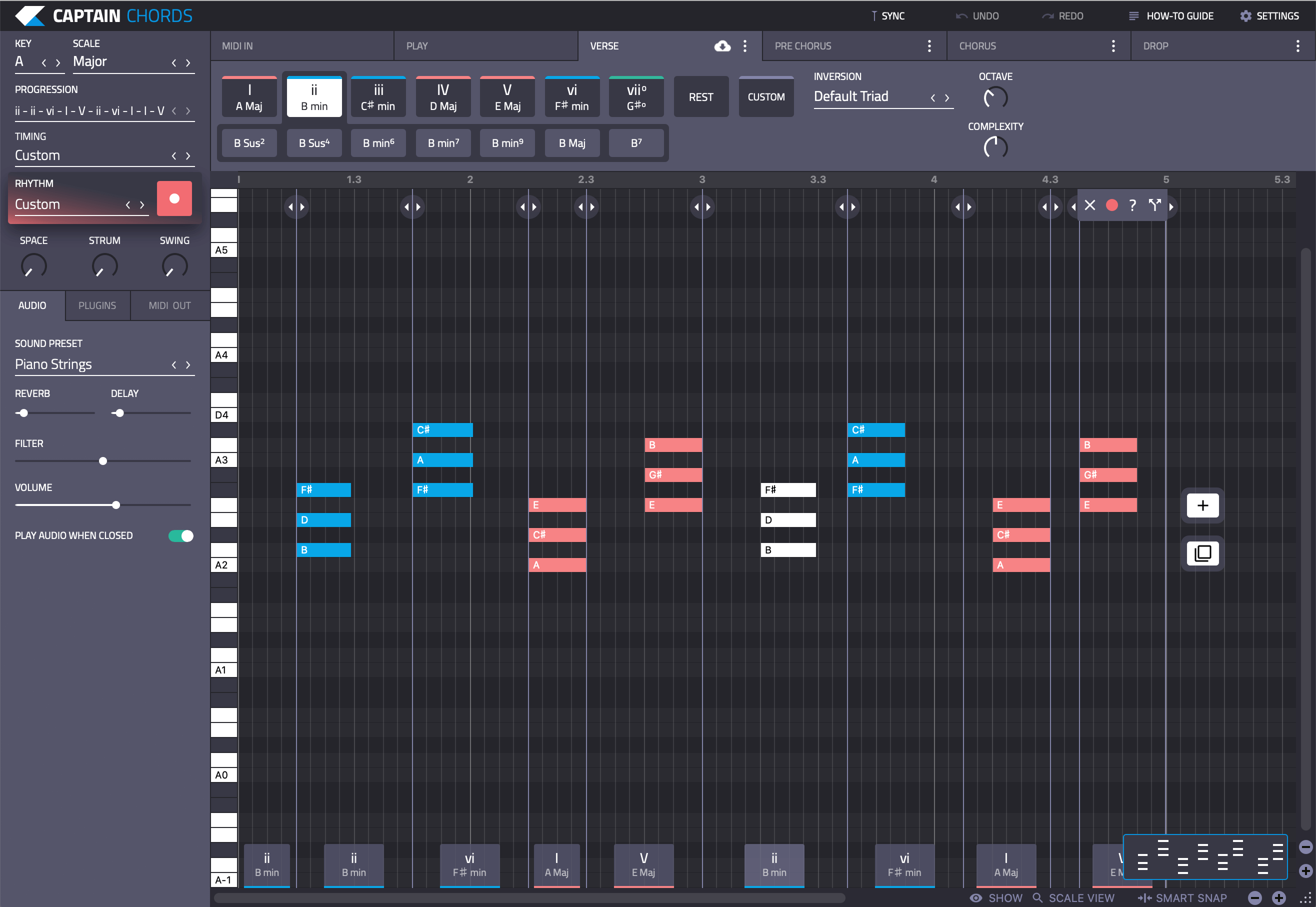 If it sometimes feels like the chords in your track are a little uninspired, merely padding out the rest of the song, it can be a good time to reconsider what it is that you truly want to express. Take the Raconteurs 2006 hit, ‘Steady As She Goes’. The chords play an ii-vi-i-v pattern for almost the entirety of the song, but do so with a clear purpose. The chords’ job is to offer rhythmic counterpoint to the bass, articulating the second and fourth beat where the bass articulates the first and third. Playing a staccato pattern through the verses, the rhythm subtly shifts, moving the third chord by a beat to make room for the main vocal melody. The track is beguilingly simple, with the chorus playing the same chords as the verse. Howver this time following, rather than counterpointing, the rhythm of the bass.

It is a wonderful example of musical economy. The song succeeds without showing off, the chords providing rhythmic differentiation that lifts the sing-a-long chorus from the more stilted verse. In isolation, it can often be tempting to feel your chord progressions should be doing something more. But, as the Raconteurs show, it is vital to consider what each element is doing in the context of the composition.

FIG B: ’Time to Pretend’ chords 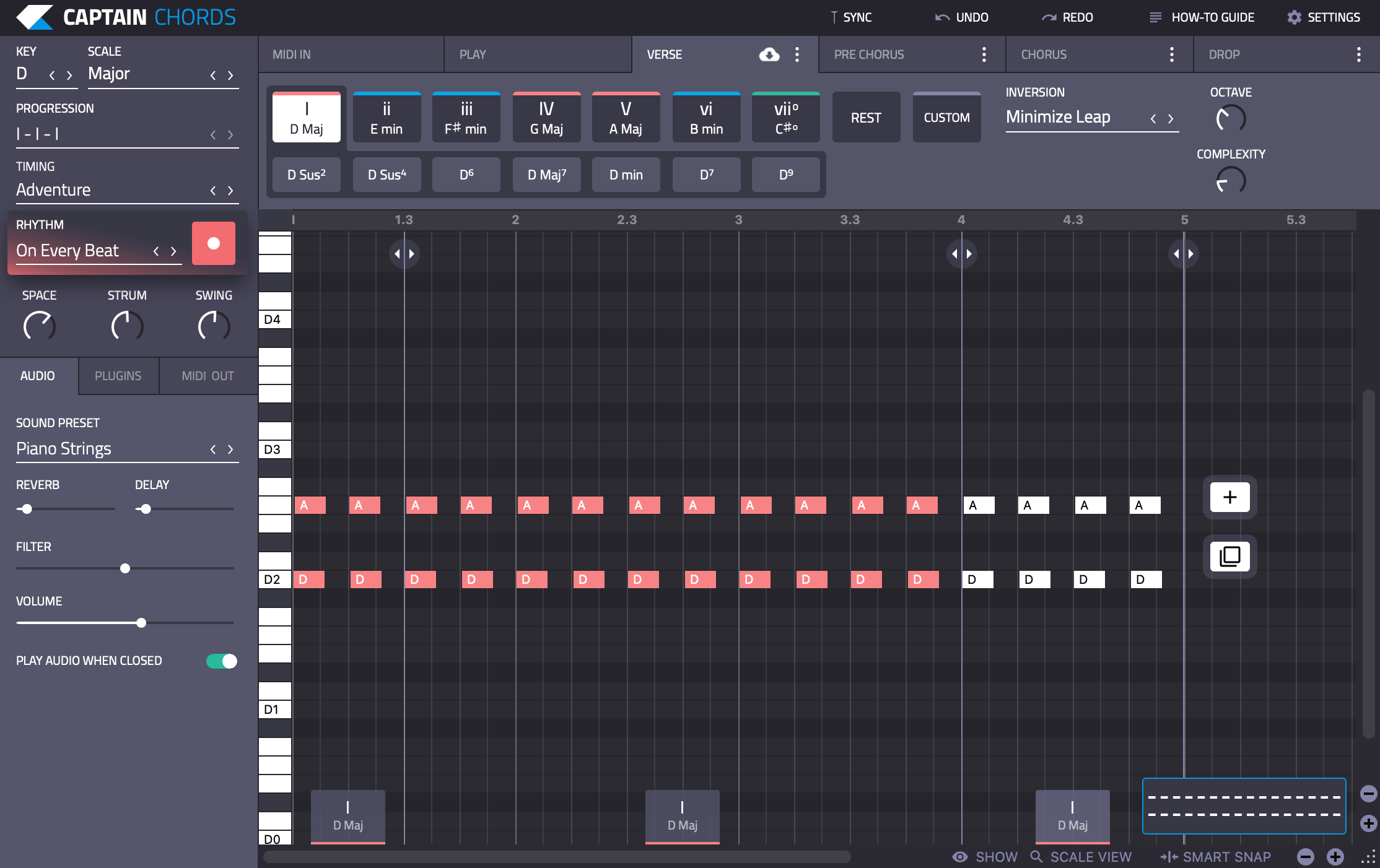 When is a chord not a chord? When it’s an implied chord!

A vital device in the often mind-boggling world of pop music production, the implied chord removes one or more note to suggest, rather than emphatically state, a particular harmonic relationship.

In many cases, such chords will split across multiple voices, allowing each instrument to take up less of the total frequency range. In this way, each element has far more space and, as such, far more clarity. MGMT’s ‘Time to Pretend’ demonstrates this idea perfectly. Opening with a guitar part playing the first and fifth note of a D major chord – D and A – the mood of the chord (whether it is major or minor) is left undeclared. When the melody appears, however, it includes the note of Fsharp – which competes the D major chord that was until this point only implied by the guitar.

Cleverly, as soon as the melody introduces the full character of the chord, it drops away. The verse – a dense mix of the lead vocal melody, erratic drums, guitar, and a distorted bass – focuses entirely on the D and A. The listener, of course, expects the full chord to appear, and when it does with the introduction of a chorus melody that resolves on Fsharp, the result is a feeling of euphoric elation. 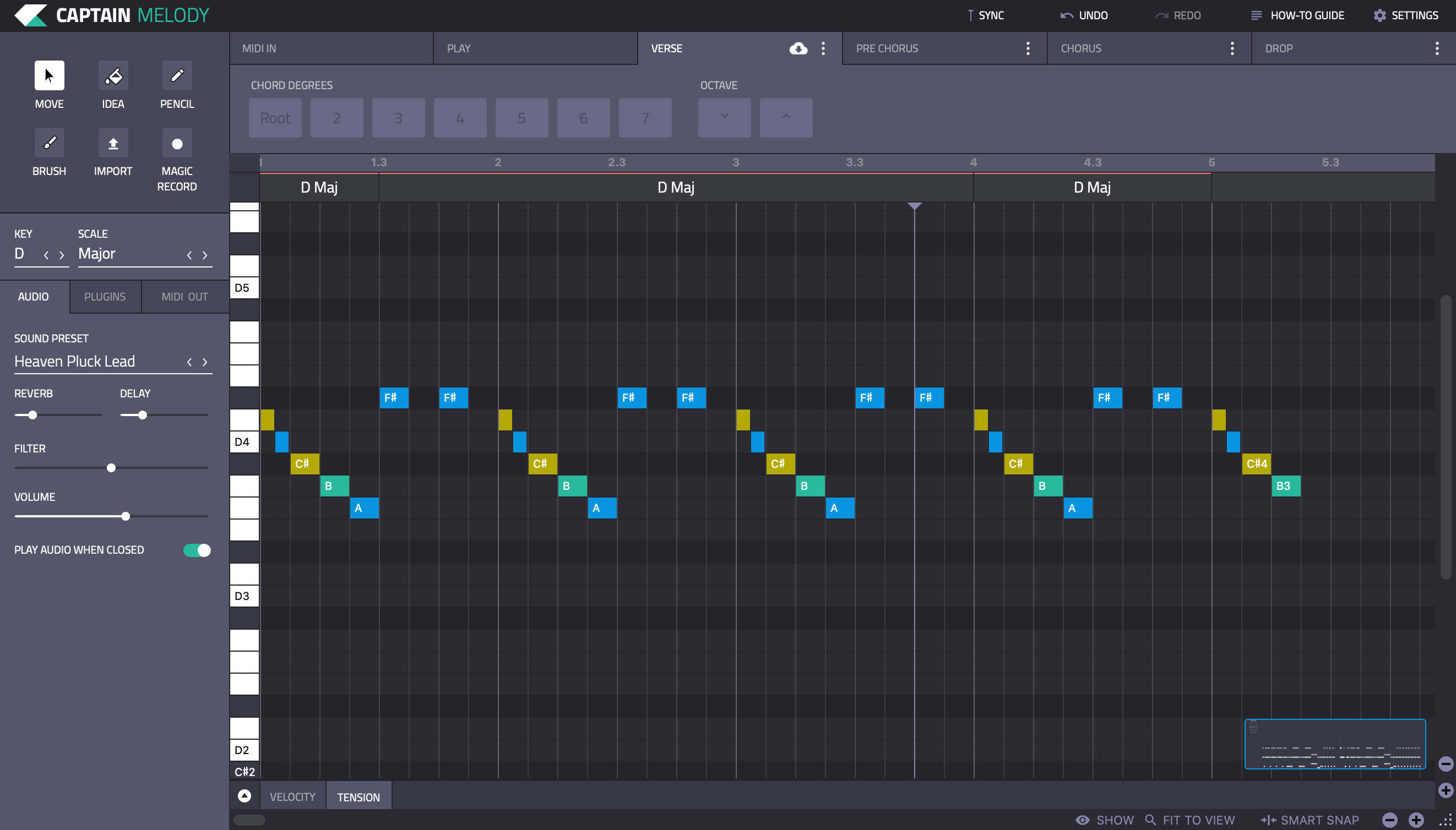 As the name suggests, extended chords include an extra note or two. Typically, the 7th or 9th note in the corresponding scale. Including extended chords does, by definition, add density to the composition. As such it tends to work best in songs with fewer elements – such as ballads.

In Ariana Grande’s ‘No Tears Left To Cry’, 9th chords are used to flesh out the often sparse arrangement. Opening with an organ-like pad supporting Grande’s voice, the inherent complexity of extended chords is used to maintain the listeners interest in a section of otherwise fairly limited musical activity.

Conversely, once the verse kicks in, this same extended chord structure – A9, F9, and G9 – fulfils a more staccato, rhythmic role. Here, the chords offer thick bursts that counteract the more meandering melody, in the same fashion that rock bands might use power chords to create a dominating wall of sound. 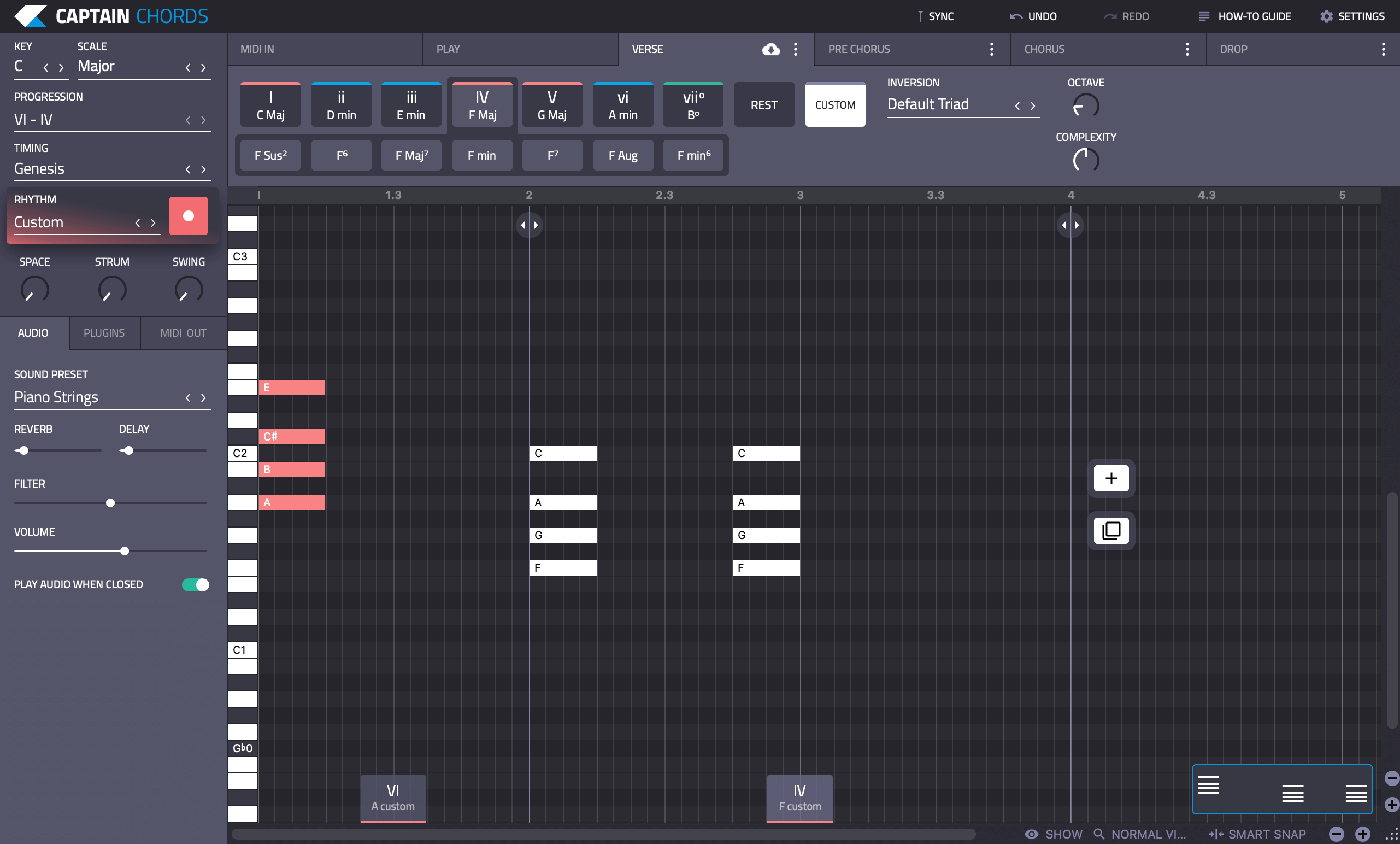 Let’s have a go at making a track that includes both implied and extended chords. Captain Plugins offer the perfect solution for writing killer chords, so start by loading up an instance of Captain Chords into your DAW. The program will prompt us to choose a key, and we’ll go with D major. Using the chord buttons at the top, enter in an I-vi-V-IV progression that covers the first 4 bars, making sure each chord inversion is set to ‘default triad’. 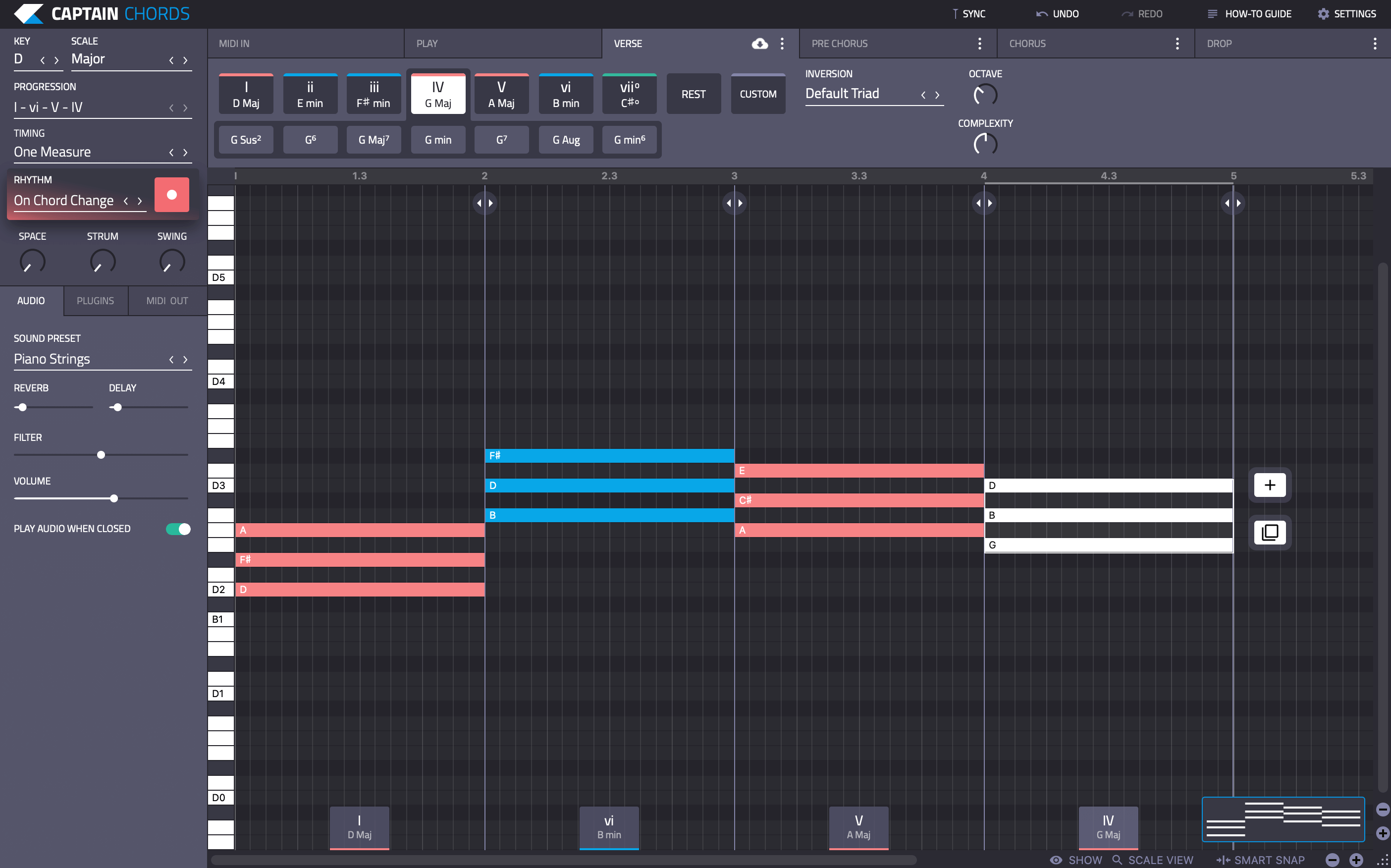 The process of producing implied chords is simple. All we need do is remove the middle note from each chord, and we are left with a more ambiguous combination of the first and fifth.

The listener has no way of knowing if our song is in D major or D minor – since it is the absent third that indicates the mood of the chord. To rectify this, create an accompanying melody to set the appropriate key. Load up an instance of Captain Melody and click connect to join it to our existing chord progression. Use the Idea tool to create a melody that spans all four bars. Of course, you may wish to emply some of the tips you learned in our Ultimate Tips for Writing Killer Melodies article here!

Selecting the pencil tool, adjust the notes of the melody so that each bar contains the missing third from our implied chords. For bar one, add an Fsharp; bar two a D; bar three a C; and bar four a B. When we playback these two parts together, the melody now completes our implied chords. This allows us to set the appropriate mood whilst leaving space for the rest of the instrumentation. 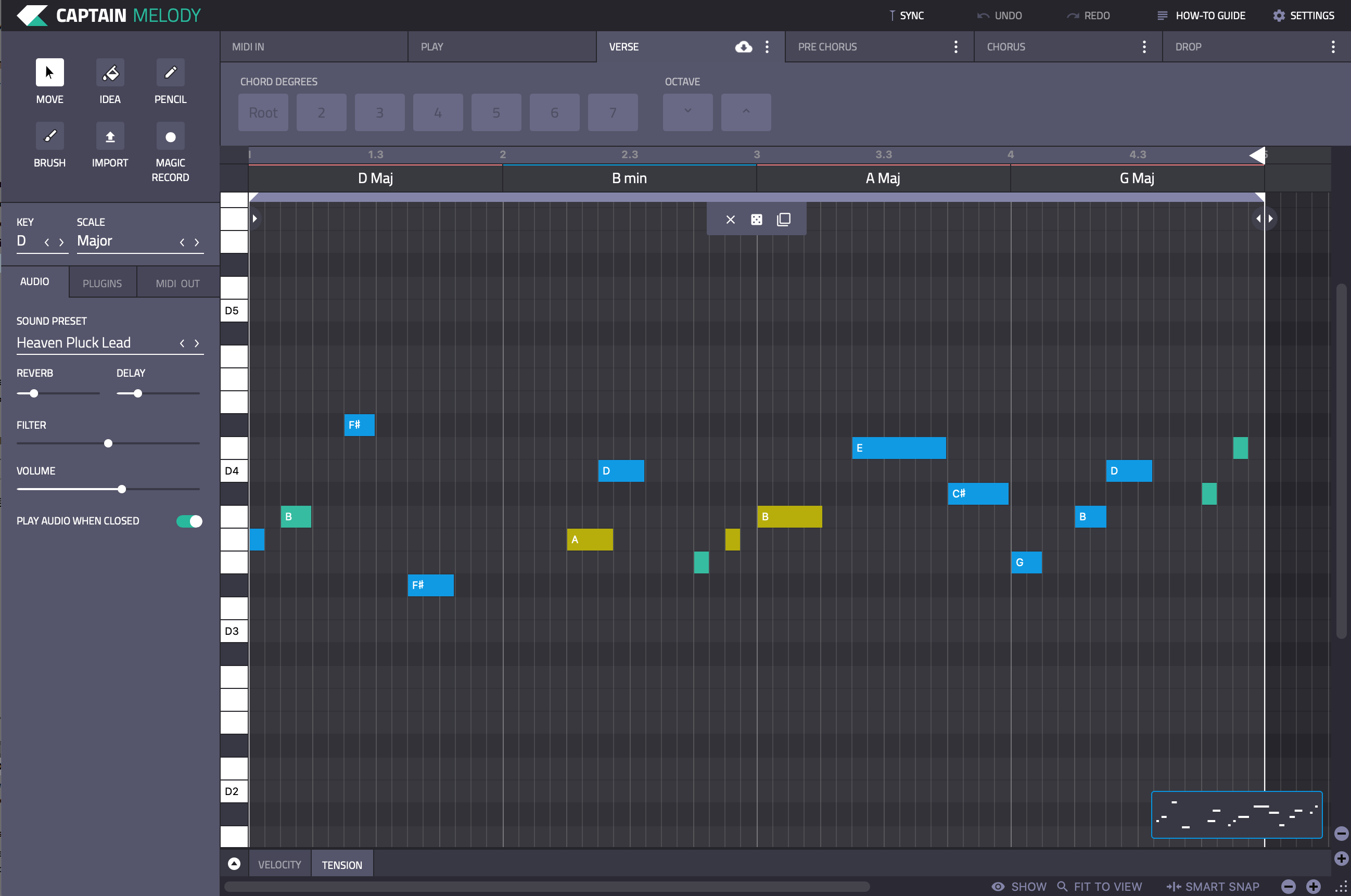 Finally, we can make the whole progression a little more interesting by inverting the order in which the two notes of our chords are played. Head back to Captain Chords and, selecting only the middle two chords of our pattern, change the inversion from ‘default triad’ to ‘first inversion’.

By doing so, we are changing the lowest note of our chord. Instead of laying a low B with a higher F-sharp, we are now playing a low F-sharp with a higher B. Although this might seem a small change on its own, when we listen back in the context of the chord progression, we can hear how it significantly changes the spirit of our composition.

No one wants to write boring music, and Captain Chords is a fantastic tool for experimenting with unusual chord progressions.

Load up a new instance of the plugin and choose the key of D Major once again. Now, add four new chords of your choosing. This time, have a play around with the more unusual chord types. Try choosing a D9 chord, or throwing in a Bmin7. Alternate them with the more straightforward voicing until you have a pattern you like. The trick to writing truly killer chord progressions is in knowing when enough is enough. Add too many extended chords and it might make the song to dense, or throw off the accompanying melody. However, by adding the right additional note at the right moment, extended chords can bring your composition to life. 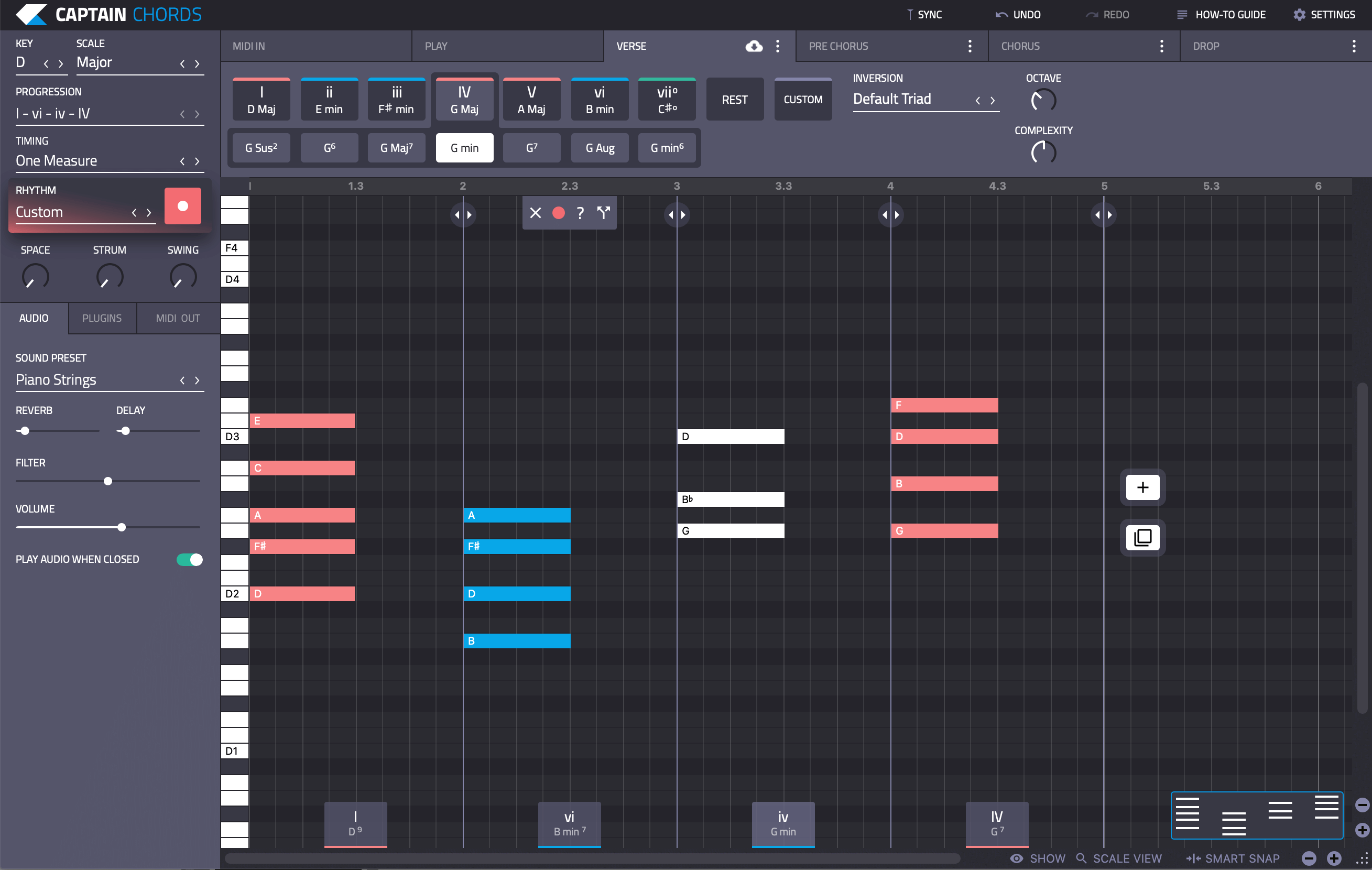 Don’t be afraid to keep experimenting. Captain Chords is designed to allow you to test out a wide range of musical ideas. Always remember that your chords need to accompany the rest of the track, so use extended chords sparingly, and if things feel a little busy, you can use implied chords, or spread complex harmonies across multiple instruments. 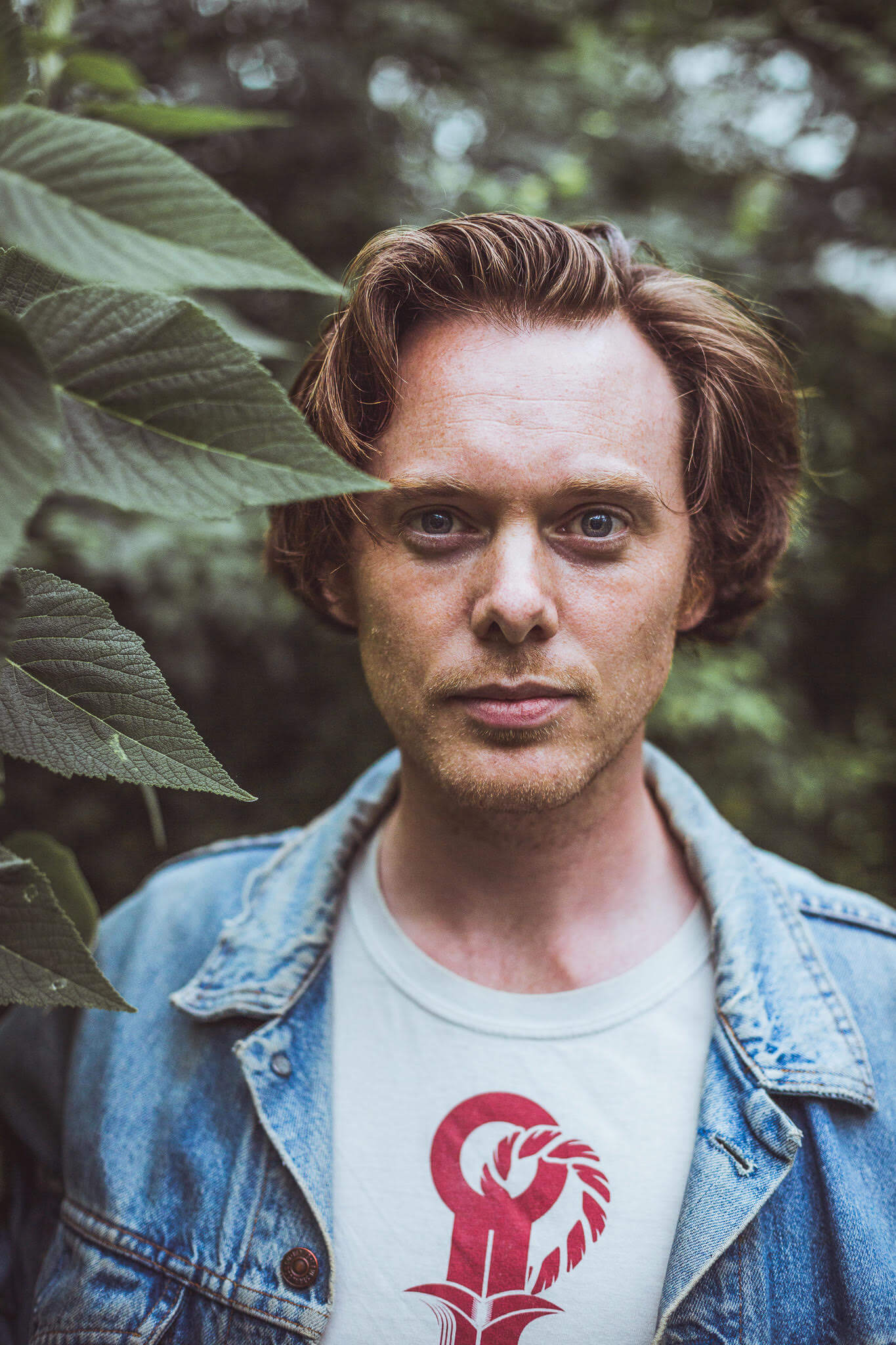