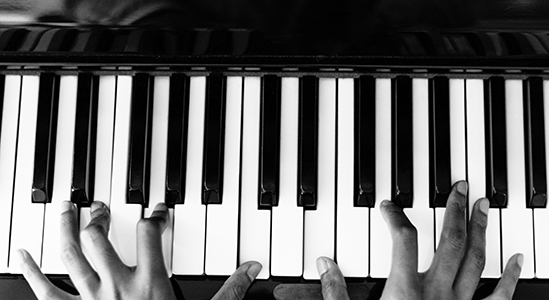 Just as the English language has punctuation marks to end thoughts, likewise, music employs cadences to finish musical phrases. They are found throughout most Western music genres, from classical to pop and jazz. Simply put, a cadence is a two chord formula that ends a phrase. It is the progression of these chords that brings the phrase to a close; they give a strong indication of the key that the piece is in.

The term cadence comes from the Latin word cadentia which means “a fall”. Cadences are an easy way for songwriters to finish their musical sentences and thus complete their lyrical thoughts.

There are four types of cadences most commonly used in all music. Two are finished and two are unfinished. We’ll look at this in more detail shortly.

If we equate music to English grammar the first two cadences are musical periods, and the second two commas or semicolons. The first is known as the perfect or authentic cadence. This cadence gives a very final sound to the end of a composition. The second type of cadences are plagal cadences (known also as the amen cadence found at the end of a hymn). These are final sounding, although tend to be somewhat weaker than a perfect cadence. And third are the imperfect cadences, which have a less final sound than the perfect cadences. They are used for a partial resolution so that the piece can still continue onwards towards the finish. Last we have the deceptive cadence which as the name suggests, deceives us. Let’s look at each of these in more detail.

As previously stated the perfect cadence sounds very final and therefore is inclined to be used at the close of a composition. It moves from the dominant chord V to the tonic chord I in the key that the piece is in. It sounds final because we expect that a song is going to end in the key that we started in, whether it’s in a major or a minor key. In the major key both of these chords are major chords. In a minor key the V or V7 chord is major (due to the raised 7th note) and the I chord is minor. Along the way the piece may wander off into another key (usually the dominant or subdominant key) but we expect it to return to the tonic key, which is what the perfect cadence does.

Listen for the perfect cadence at the end Shawn Mendes’ ‘If I Can’t Have You’.

If you have ever sung “Amen” at the end of a hymn, you have experienced the plagal cadence. Plagal cadences move from the subdominant IV chord to the tonic I chord in major or minor keys. It still sounds pretty final, although it is not as strong a finish as a perfect cadence. Both chords are major in a major key while both chords will be minor in a minor key.

Here is an example of a plagal cadence in the key of C Major. The F chord IV resolves to the C chord I. It’s going to sound final because it ends on the tonic chord, but because the IV is a weaker chord than V, it doesn’t give quite the same culminating finish to a piece as a perfect cadence (V-I).

Here’s a video you can hear the sound of a plagal cadence in.

An imperfect cadence occurs in the middle of a piece, not at the end. It differs from the perfect and plagal cadences in that it does not end on the I chord. This type of cadence is also known as a half-cadence. The second chord is always the dominant V chord, although the first chord can be one of many. The most commonly used chords in this cadence would be the tonic chord I, the supertonic chord ii, or the subdominant chord IV. Ending on the dominant V chord keeps the key established although it has a strong feeling that the piece has not concluded. It still needs to resolve back to the tonic.

Here’s an example of an imperfect cadence from the Foo Fighters ‘Learn to Fly’. The last three chords are I IV V, skip to 4:18 to hear it.

Another example from a classic rock tune is ‘Baba O’Riley’ by the Who. Listen for the imperfect cadence at 2:09

The deceptive cadence is a cadence which occurs when you have the dominant V chord leading to any other chord except the tonic I chord. Most commonly it is found as a V to vi. It has a surprise effect as you are not expecting the resolution of the V chord to end this way. When you listen a song that has the dominant V chord, you anticipate it to resolve to the tonic, but when that doesn’t happen you’ve been deceived…hence the term deceptive cadence. It’s not a final cadence and therefore is not used at the end of a piece. Here is an example from one of my personal all time favorite songs, The Beatles ‘P.S. I Love You.’ This piece includes four examples of deceptive cadences at 0:25, 0:43, 1:15 and 1:47.