Logic Pro X comes with a potentially bewildering array of on-board plugins, instruments and fx units. There’s enough power inside the DAW to create professional music in any genre without spending an extra penny.

Let’s take a look at the plugins and what makes them so well regarded among producers. 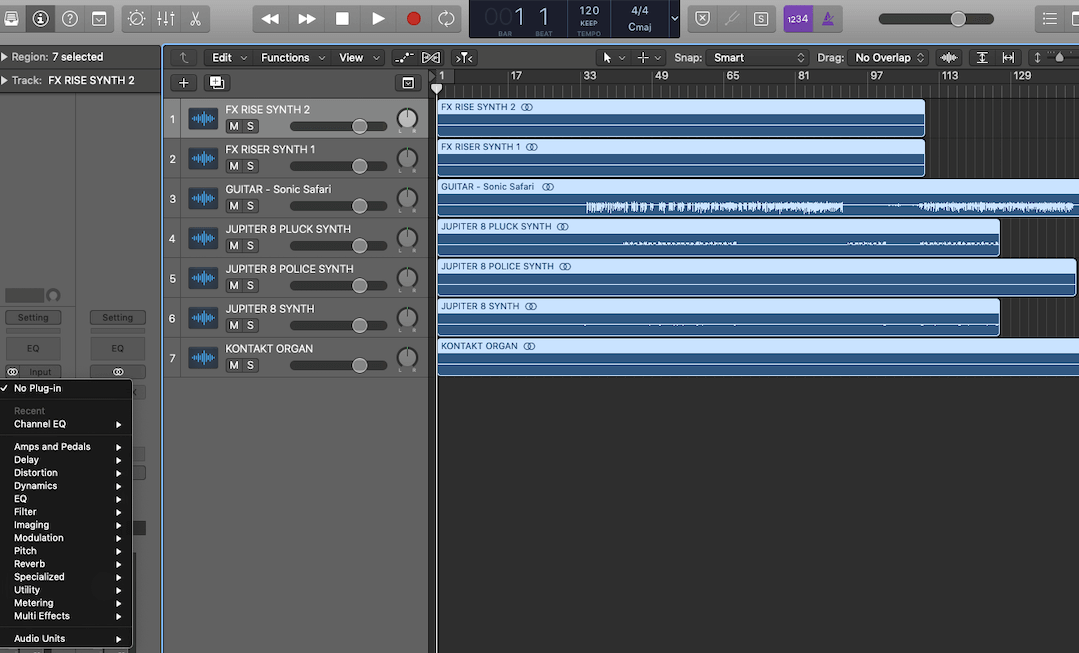 These are the nuts and bolts of any production. Fortunately, Logic has a high quality offering in each department

You can’t make a track sound decent unless your EQ is in order.

Imagine cooking a fish pie without preparing the vegetables, cleaning the fish and making the pastry. You’d just have an inedible mess of ingredients.

This is, metaphorically, exactly what you’d have if you tried to record a track without EQ.

The latest updates for Logic have seen an impressive roster of EQs expanded to include the Vintage EQ Collection. Console, Tube and Graphic EQs that behave and sound like EQs of yesteryear. Great for capturing old school flavors

Most commonly used these days, the Channel EQ is the bread and butter of EQs. With multi-faceted control options and a pretty handy spectral analyser, you can identify and eradicate unwanted frequencies in a flash.

Linear Phase EQ is a super handy tool for identifying and fixing phase cancellation, AKA ‘smearing’. You can pay big bucks for this type of analysis and control, and while this version is somewhat limited in remit, it ain’t half bad.

Match EQ gives you the opportunity to directly compare the frequency behaviour of two different sounds. This can be great if, say, you’ve recorded a vocal and it’s not sounding like the last session you recorded. Match EQ will give you a visual indication of the discrepancies between the two, so you’ll have a better idea how to proceed. 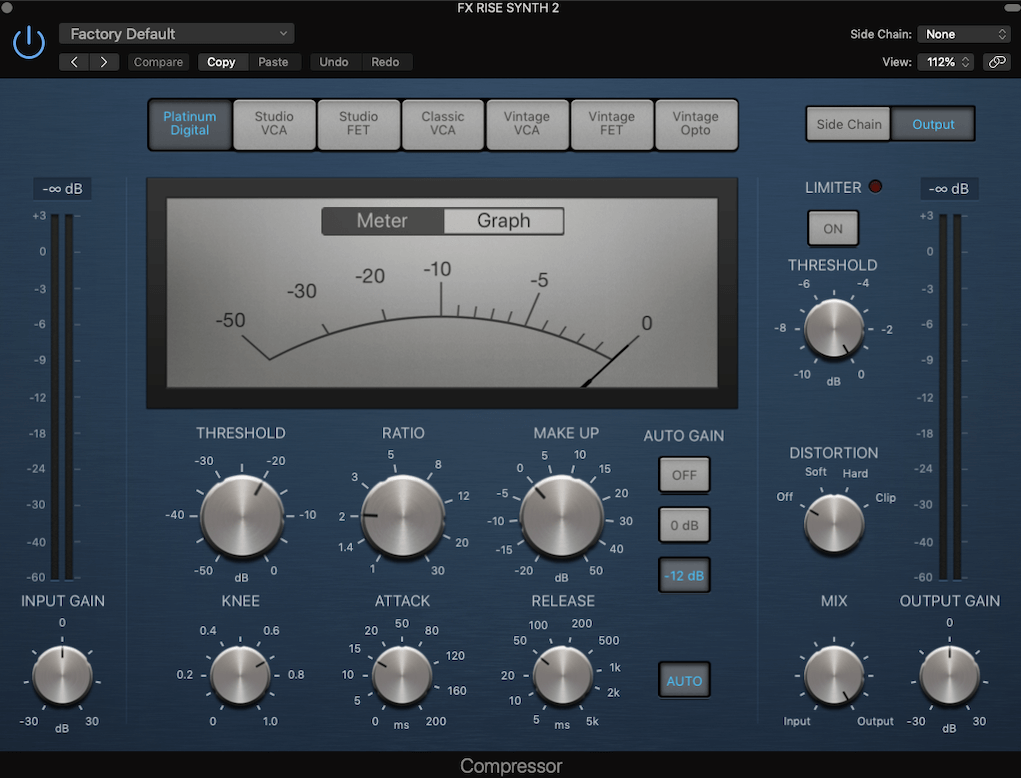 Nearly as important as a good EQ is good compression. There are a huge range of globally available compressors that provide different results and range in function. Establishing the right compressor to use at the right time can be daunting and confusing.

It’s generally advisable to keep it simple and clean until you’re more familiar with the effects of compression.

While Logic’s compressors don’t provide as full a range of permutations as some more expensive options, they are quietly impressive.

With 6 different options to choose from, producers can run the same sound through them all and test for different effects. Without going too far down the rabbit-hole of compressor tech, the main difference between them is the way they reduce the gain of your sound, which becomes more noticeable the more you drive it.

One of Logic’s best-designed feature-functions is particularly welcome here: an easy to apply Side-Chain option. Logic’s compressors give producers a simple means to side-chain the compressor to any audio signal or bus.

It’s a great way to enhance and emphasise desired sounds, like a kick drum, without having to ramp up the volume and destroy the mix balance.

The compressor(s) are buried within the Audio Units & Dynamics tab. This seems a strange choice when you consider how ubiquitous compression is!

A word on the multipressor (also buried in the Dynamics tab), which is a more complex version of a compressor. You can essentially split your compressor into 4 for different frequency bands. This means, for example, you can leave your hi-hats wild and untamed at the top of the mix while your bassline and kick are tightly clamped.

Logic’s multipressor does everything a multipressor should do, with limited artifacts and fairly decent performance across the frequency spectrum. More advanced producers may find the UI and window size a little restrictive, however. 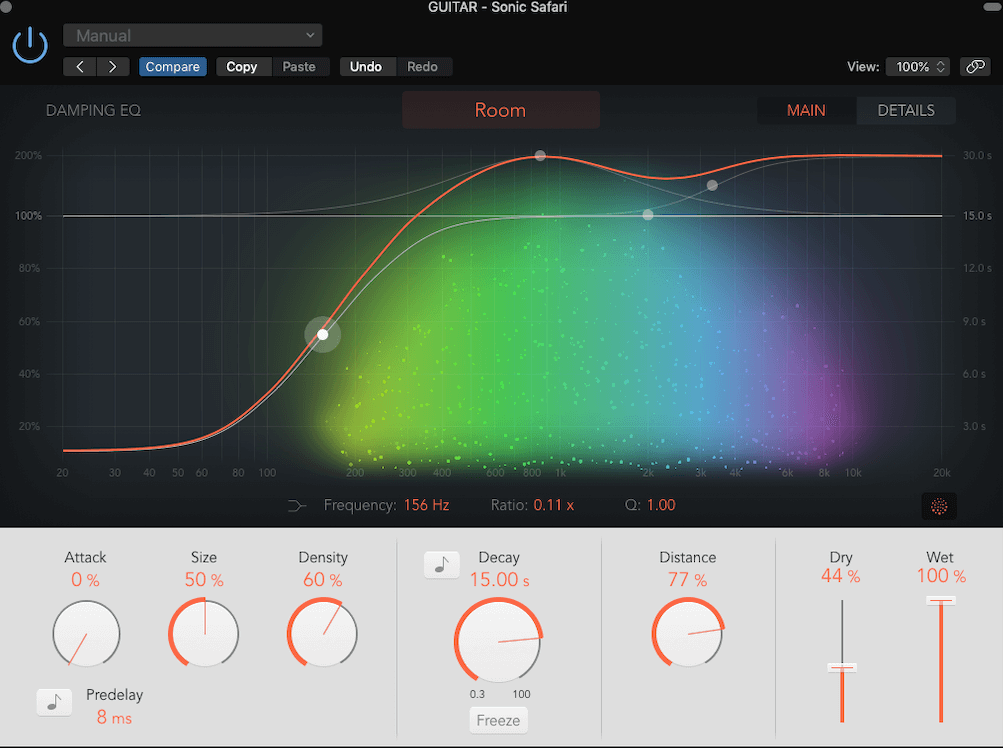 A streamlined selection (so long AVerb, Goldverb and PlatinumVerb) has been trimmed to just four on-board reverbs.While this might seem a bad thing on first look, fire them up and you’ll perhaps understand why.

Reverb is one of the most characterful tools in a producers’ locker. It’s capable of turning the most mundane sound into a space-travelling cosmonaut or den-dwelling hermit.

Reverb plays with the space inside your mix, bringing sounds to the fore or sending them to the back. For these purposes, the brand new Chroma Verb is astonishing. It’s UI has been simplified from it’s older brother, the Space Designer. it also seems to have taken on aspects of popular reverbs like FabFilter Pro-R.

Add in a sublime visual display and multiple room textures and you’ve got a stunning plugin.

The EnVerb allows specific frequency bands to gather reverb, which is an excellent and intuitive tool for sound design and special FX. Meanwhile the SilverVerb is subtler in effect, giving you the option of Chorus modulation over your reverb tail.

Check out the gigantic reverb ChromaVerb can create below 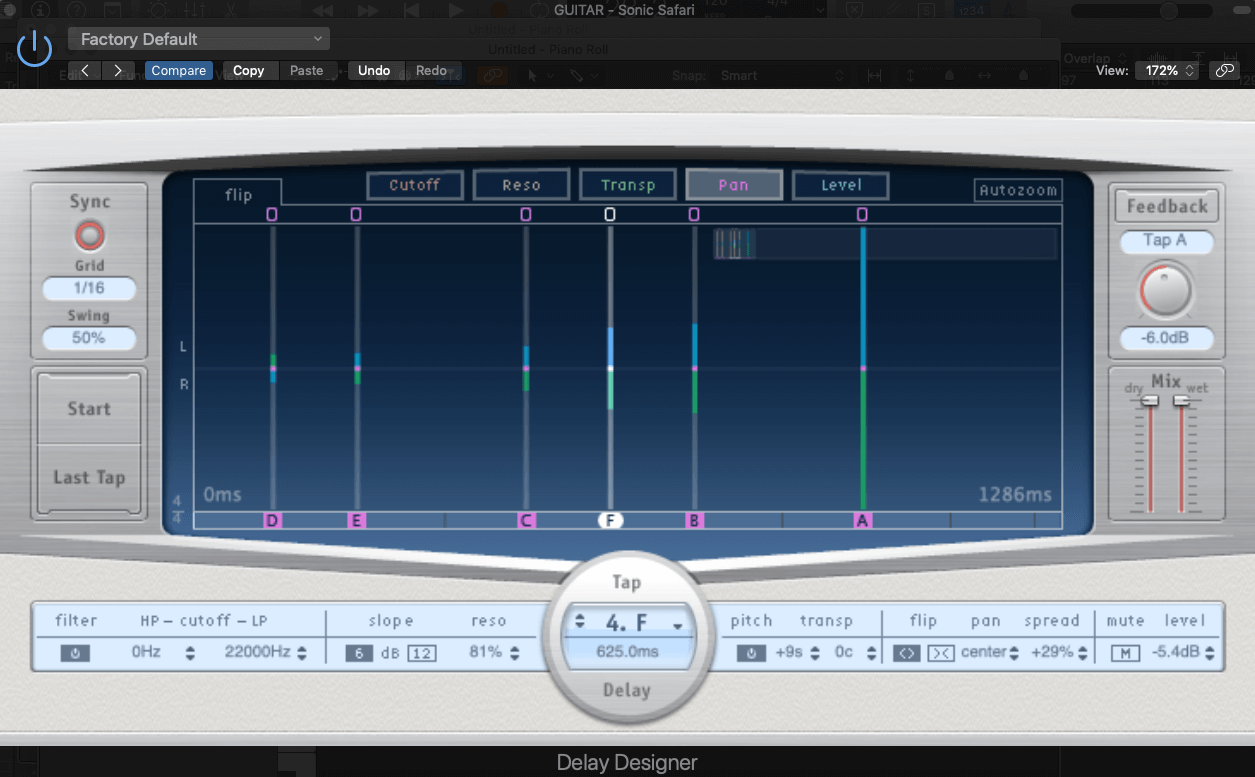 Logic Pro X comes with enough delay power to create a wealth of echos, delays and glitched up bouncing effects. These tools have a definite character of their own compared to Ableton or the many popular market leaders.

Easiest to get to grips with is Tape Delay. With simple to use controls you can choose the range of your delay, add swing, wet/dry, rate and time to give your sounds life and character.

Delay Designer is a truly marvellous creative delay tool. It’s capable of straightforward delays and glitched out madness in equal measure. You can control Pan, Volume, Transposition, Resonance and more for each parameter, resulting in mind-bending delays!

Try combining multiple Delays and marvel at the broad and powerful textures at your fingertips. 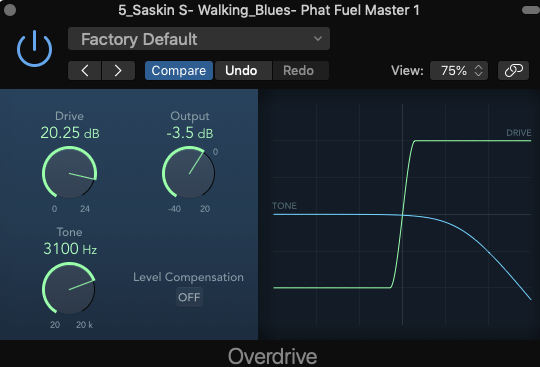 Another plugin range that’s been given a revamp in recent updates is Distortion. What were fairly uninspired saturation tools have been turbo-charged. The UI is noticeably improved, but it’s the tonal quality that really impresses.

Gone are the boxy, lifeless sounds, and in their place a bunch of cast-iron saturators that breathe energy and raw power.

Bitcrusher has long been associated with 90s games console FX, but it’s a marvellously powerful tool that can make drums, vocals and bass tones sound chunky and wild in an instant.

Distortion 1 and Overdrive sound great, although they are nearly indistinguishable in effect. Distortion 2 has a tinny, broken radio style sound, The Clip Distortion acts like a Tube Distortion, great for warming up sounds, while the Phase Distortion module gives resonant frequency-band control to your distortion and sounds immense on drums. Aciiid! 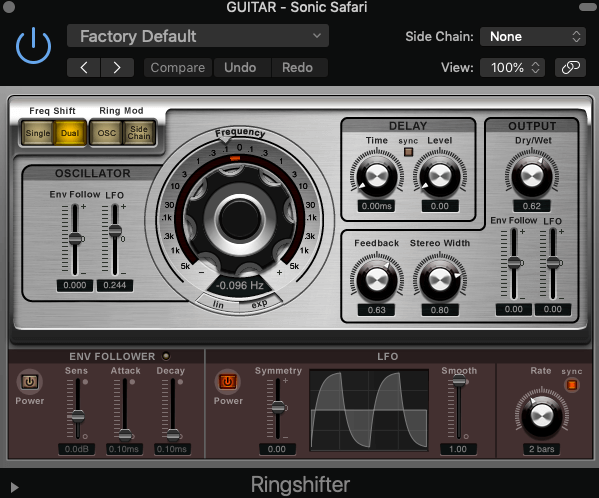 Further down the Audio Units menu is the Modulation menu. In here you can find all manner of familiar tools, such as Chorus, Ensemble, Flanger, Phaser and Tremolo, alongside Microphaser, Ringshifter, Scanner Vibrato and Spreader.

These all behave in fairly standard ways, to be expected for such traditional production plugins. While Chorus, Phaser, Ringshifter and Flanger can sound better in more expensive audio units, the immediacy and ease of use is highly attractive. Plus, there is enough control and power to craft professional quality sound with each one. 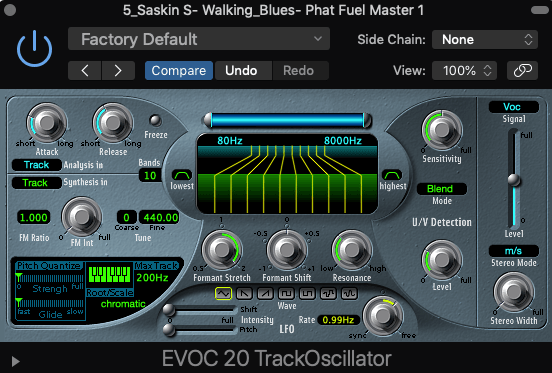 This bank contains a stack of tools for adding evolving FX to your channel strip.

Autofilter is a cool method of adding the kind of FX you might apply with automation controls on a bunch of plugins without needing to individually program each one.

Fuzz-Wah gives a fairly satisfactory rendition of a traditional wah-wah pedal (and overdrive should you desire it). Spectral Gate is a pleasingly versatile way of cutting and accentuating chosen frequency ranges.

The FilterBank is capable of wild sound design 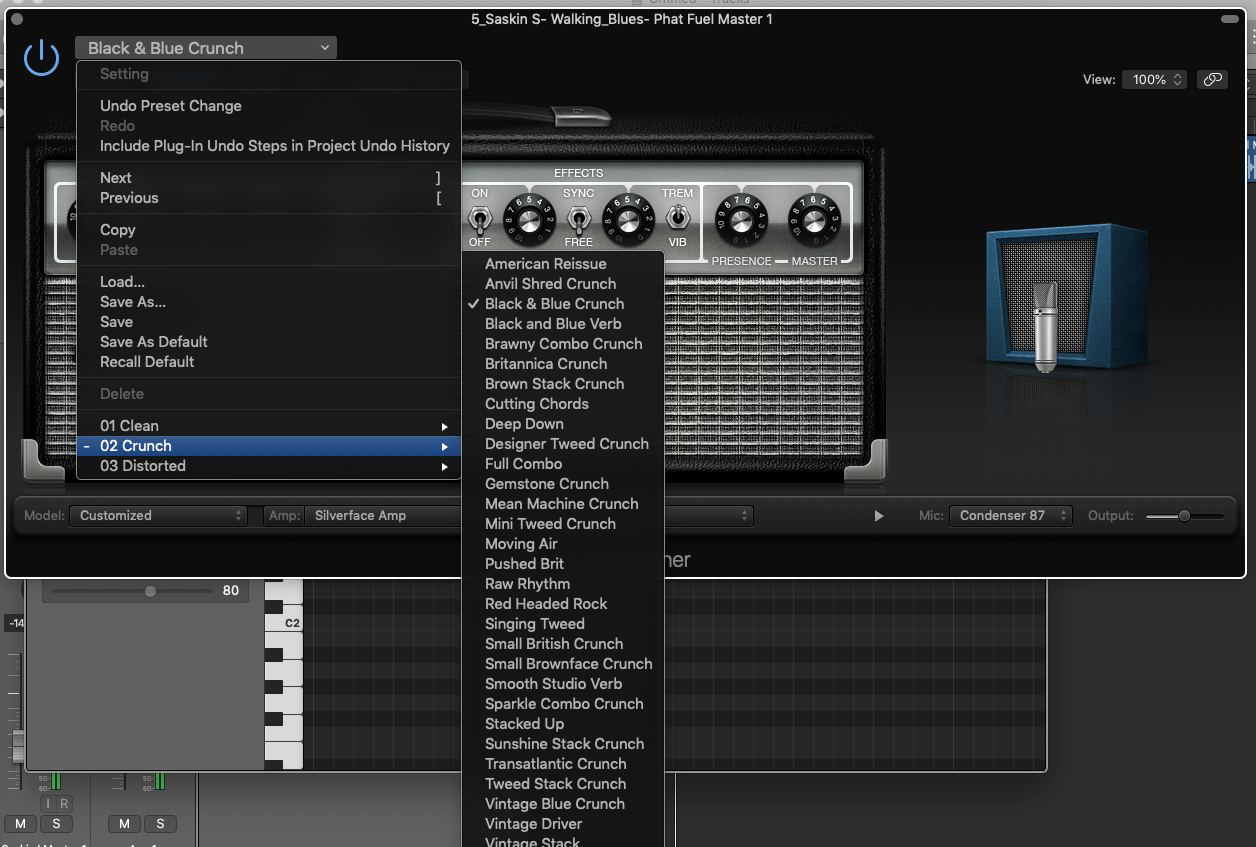 Want to run a straight guitar or synth part through a classic amplifier, FX pedal or rack unit but don’t have a guitarist friend to beg gear from? Logic has you covered…

There’s a pretty wild array of amps to scroll through, each with a summed concoction of individual plugins. Calibrated in myriad ways they can add different flavors and character to your sound. With so many well-designed amp simulations, it’s hard to imagine a scenario that you couldn’t find the right amp for. They even compare favourably to industry leaders like Slate Digital’s Souffler Amp!

Pretty, shiny colours abound inside the pedalboard. And the sound isn’t at all bad, either.

Stack your FX like a guitarist (with an unlimited budget) and you’ll quickly get lost in a sea of powerful sound manipulators.

From Phase to Fuzz, Chorus to Saturation, the units within the pedalboard are the wild cousins of the Audio Units range. Expect them to lurch into your niece’s bar mitzvah, eating all the burgers and slugging whisky from the bottle.

Pedal to the metal 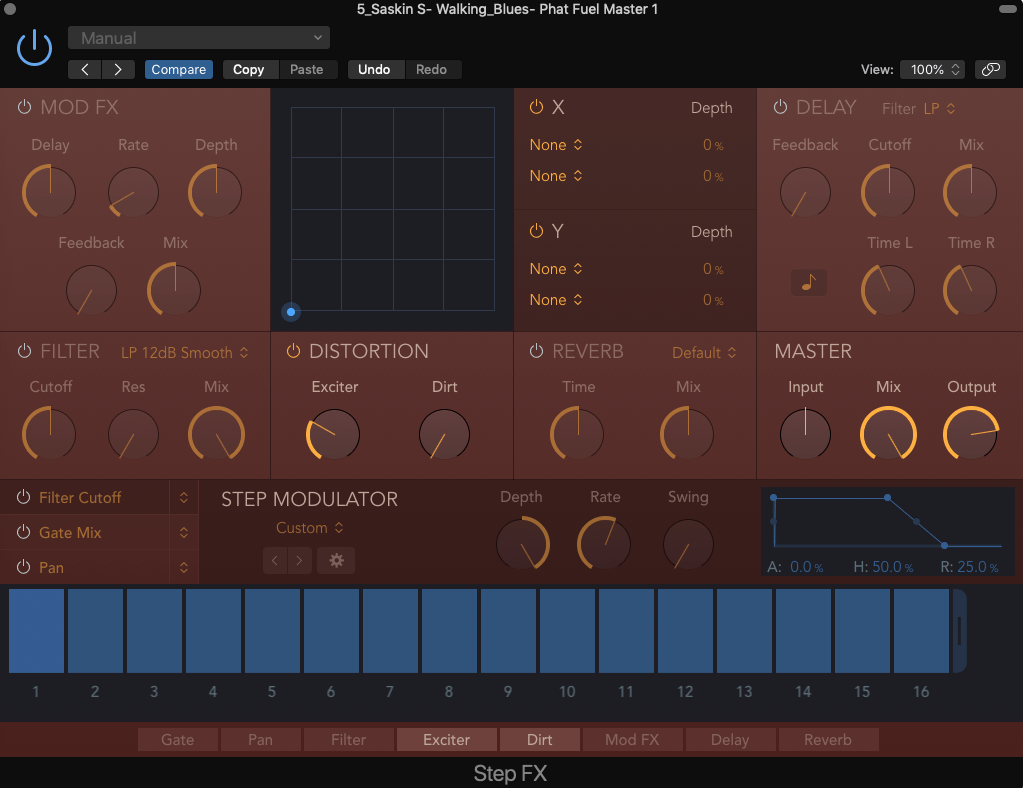 It’s hard to think of a competitor that can match Logic’s Multi-Effect racks for beauty, ease of control and sound quality. Almost worth the price of the DAW alone! 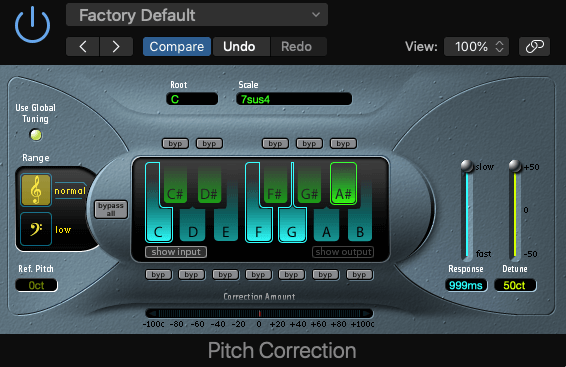 Logic’s attempts at Auto-tune and Pitch correction are, to be fair, rudimentary, yet still provide enough welly to offer tangible usage.

Bringing vocals, fretless bass or other imprecise instruments into consistent pitch is an industry-standard these days. Logic’s unglamorous Pitch Correction achieves this with minimum fuss and less sound coloring than many expensive alternatives.

Likewise, the Pitch Shifter allows drastic or subtle transposition with ease. Finally, the Vocal Transformer is a great little tool for busting out deranged sounding vocals. 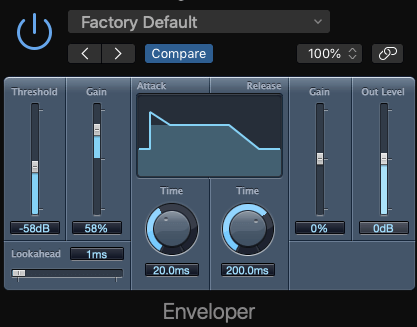 Containing the above-mentioned Compressors, the Dynamics bank also comprises a multifarious selection of disparate but crucial tools. From the De-Esser, to Limiters, Noise Gates and output editing tools Expander and Enveloper, there’s quality sound treatment at your disposal. 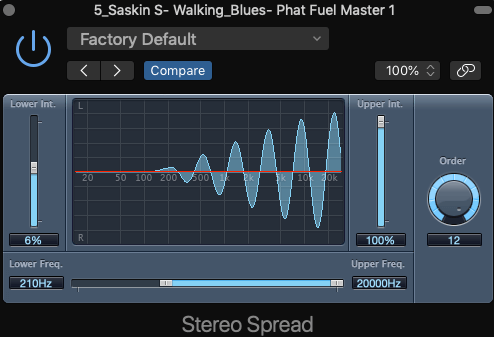 While Izotope’s Ozone Imager is feted as the industry standard Imager plugin, Logic’s efforts provide a comprehensive solution to a range of post-production problems and stereo-widening needs. And, while it doesn’t look as pretty as Izotope’s tool, it has much of the same capability. 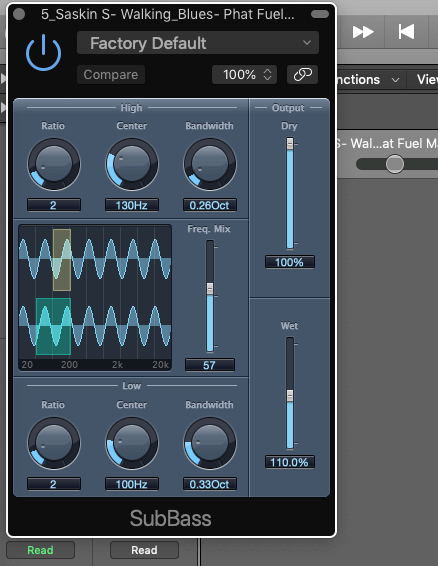 A bit of a dumping ground, in truth. Exciter and Sub-Bass treatment in the same menu? An odd couple, no doubt. But bearing in mind how universally Exciter is applied to drums and bass in dance music, and how vital solid sub bass is, this folder should not be overlooked.

The modus operandi for both is simple: boost and colour the sound in dynamic ways. Exciter will add sparkle, and you can probably guess what the sub-bass does. But unless you have top-end referencing systems, chucking boatloads of sub into your mix might sound great until you get to a club system that can properly replicate it, where it could result in an overall loss of dynamic range and volume. 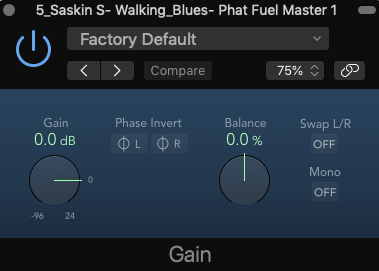 An uninspiring name, granted – but the Utility bank should not be overlooked. Inside are post-production tools Gain and I/O, and a natty Test Oscillator that allows in-depth analysis of your speakers and acoustic treatment.

Gain is the most obviously usable of these. It can correct phase distortion, sum stereo output to mono and switch stereo outputs from Left to Right.

You need to see your levels, sometimes, and this is where to do it. From BPM counter to various metering tools and even a Tuner, the Metering bank is an unfussy visual representation of your audio.

Logic Pro X has a tough job on its hands keeping up with the ever-innovative Ableton Live and new players like FL Studio. It’s always prided itself on quality sound controls, yet occasionally undervalued the visual experience. This last concern has been swept aside with recent updates, while the sound quality and, frankly, brilliance of its on-board plug-in range should see Logic Pro X maintain its place in the top table of DAWs.

What’s clear is producers can craft professional quality audio without spending an additional penny, which is quite an achievement in these ultra-competitive times.

It’s super easy to create your own ideas from scratch. Visit the official Captain Plugins and see how it will help you explore music and write your own original productions.