How to write a bassline 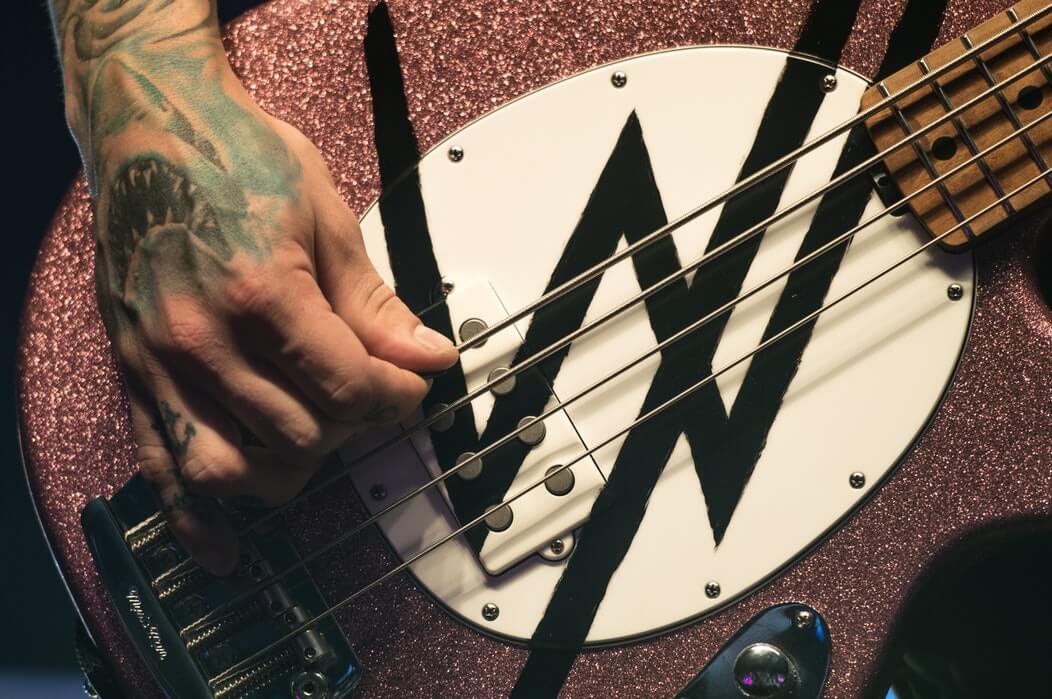 For most genres of music, the bassline forms the foundation of the recording. It creates a sense of weight and can be used to add groove through simple repetitive riffs or motifs. Basslines tend not to be as complex as melodies. However, they still play an important part in making music memorable.

Usually played on the lower registers, bass-lines can be created using most instruments; the choice of instrument largely depending on the chosen genre. In rock music, for example, the bass guitar is king for creating bass sections. Whereas in electronic music synthesizers such as Roland’s classic TB-303 or the Moog Minimoog are used extensively for their unique bass timbres.

In this tutorial we look at how to approach writing a bass-line and include some tips to ensure that laying down the foundation of your next track is inspiring and fun.

Before considering any element of rhythm or timbre, the single most important aspect is to understand which key and scale you are composing in. The reason for this is that by knowing the key and scale we can single out exactly which notes we can use, and which notes will sound off-key.

For example, let’s say the only element we have in a track is a chord progression in the key and scale of G minor. The song we are writing is in 4/4 time, in a dance music style with a tempo of 128 bpm.

Need to find the key of your samples?

Here’s the chord progression which we created in Captain Chords:

The key and scale of G minor contains the notes G, A, Bb, C, D, Eb, F and G. We don’t need to use all of these notes when writing our bass-line, but we should be able to use any of them, should we wish. A great starting point, when writing a bass-line to compliment a chord progression, is to use the root-note of each chord in the progression as the note for the bass-line.

If you’re unsure which notes are in your chosen key and scale, this website offers a simple way to check: https://www.pianoscales.org/ 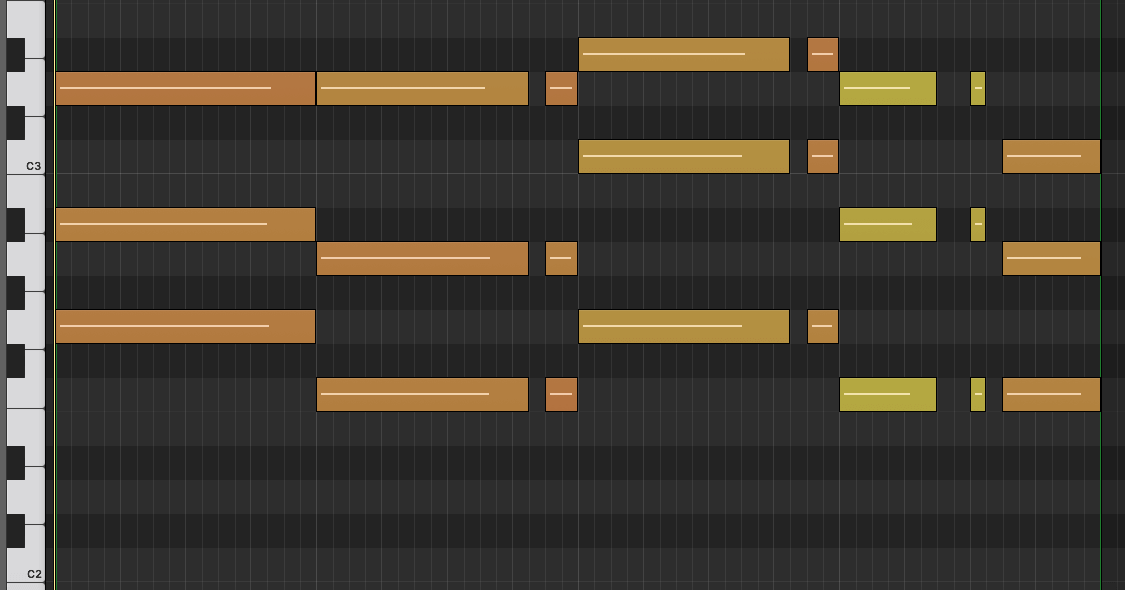 The root note of each chord in the MIDI notes above are G or F. A simple bass-line would play a rhythm which repeats each bar and alternates between the notes G and F. 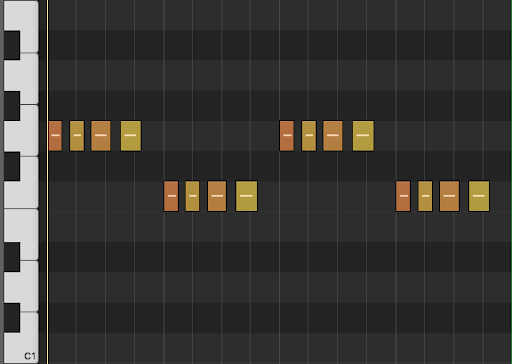 And sound like this, when mixed with the chords:

I’m sure you’ll agree that this bassline could be improved. We can easily make the bass-line more interesting by using some of the other notes found in the G minor scale and by adding rhythmic variations.

Here’s an alternative bass-line; instead of repeating the G and F notes for the 3rd and 4th bars, we use C and Bb as they are also in the key and scale. To add another element of interest, we can move some of the notes within the bar. As can be seen below, we’ve dropped the very last note of the sequence to A. 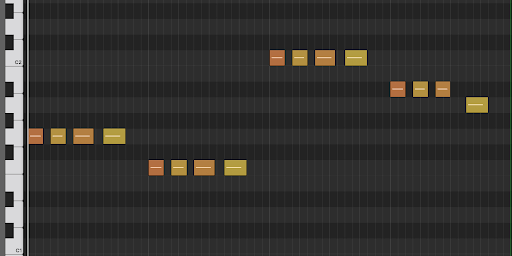 This sounds far more exciting than the first bass-line and there was no guesswork involved in finding the best notes.

We’ve focused on finding the best notes for a bass-line, but what about the rhythm? The best rhythms are often dictated by what the other instruments are playing. For example, you might want to have bass notes placed where other instruments take a break; this can help create a flowing and uncluttered arrangement. It also helps to have a beat in place such as a kick drum to help find the best groove.

Here are the same chords and bass-line, but with the kick added back in. I say “added back in” as I actually added the kick drum prior to auditioning the bass-line to ensure I would create a bass-line rhythm that was in time.

Here’s how it sounds with the bass-line, chords and kick drum:

As you can hear, the bass-line gels well with both the rhythm of the kick drum and the chords. It also takes a break at the end of each bar to allow the extra chord hits to take precedence, thus leaving the arrangement sounding uncluttered.

As bass notes and kick drums contain similar frequencies, they could be fighting for space in the mix. You can help create space for both elements by adding sidechain compression, or, ‘ducking’. This allows the bass-line to be tamed while occupying the same rhythmic position as the kick drum.

This technique for writing a bass-line can be used across many genres of music. However, there are many other approaches which can create amazing results!

The rolling bass-line – most famously used by Ferry Corsten and Tiesto in their classic Trance hit Gouryella – Gouryella. This style of bass-line plays a 16th note rhythm, with the note landing on the kick omitted and the offbeat note placed an octave higher. Using a raspy bass timbre, it’s super-simple and creates a powerful driving effect. Make it even cooler by following the root notes of your chord progression; just remember to move both the high and low notes to match.

The Riff Bass-line – This style of bass-line plays what can be called a ‘lick’ or ‘short melody’. Popular in R&B and Rock music, a well-known example is Money by Pink Floyd. Here’s another example created using the Play tab in Captain Deep and combined with a Hip Hop drum loop in Eb minor.

The notes begin on the root note and are more spread out in the first half of the bar. They become faster and higher in the second half of the bar before repeating the same arrangement in each consecutive bar. This creates what is known in music as ‘call and response’. The first half of each bar is the ‘call’ with the second half offering the ‘response’.

It’s super easy to create your own ideas from scratch. Visit the official Captain Deep homepage and see how it will help you explore music and write your own original productions.