How to Create Chords 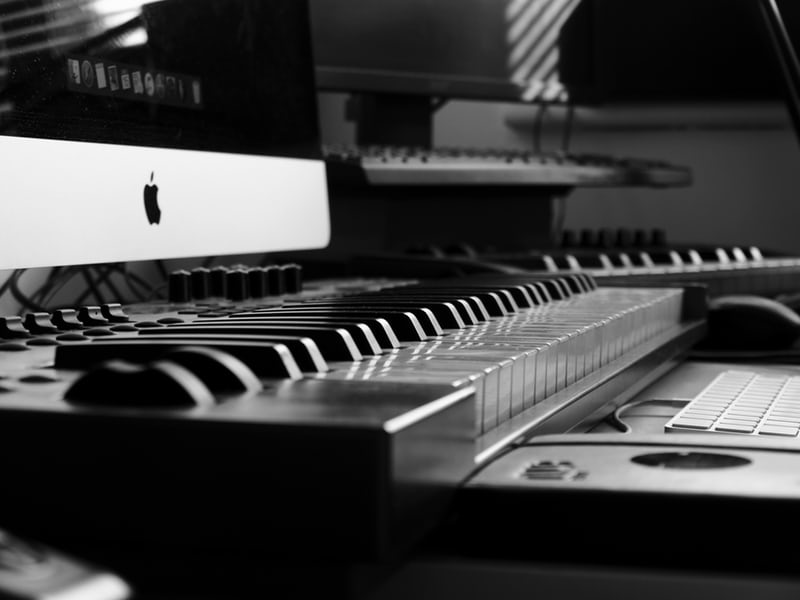 If you’re looking for a chord chart to help with your music compositions you’ve arrived at the right place. This article will help you to find the correct notes for major chords, minor chords, 7th chords, diminished chords and augmented chords. You’ll find out how to build each of these types of chords which will ultimately help you with your compositions. We’ll go through each type of chord and what intervals (the distance between two notes) make up each chord. At the end of the article is an easy-to-reference chord chart. 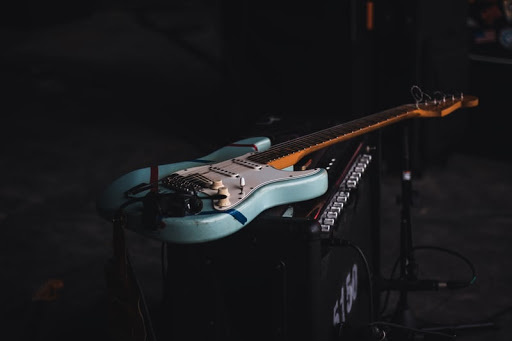 First we need to know what chords are. Chords are a combination of two or more different notes. The simplest chords are comprised of three notes piled on top of each other to create a triad. They are named by the root or bottom note when they are stacked up in 3rds. A chord comprised of C E G would be named “C”. This is a Major chord or triad, but you don’t have to add the “Major” part as it is implied in the name. If the notes are C Eb G, then you have a Minor triad and it would be called Cm or C-. To turn any triad into a four note chord you need to double one of the notes, usually the bottom note. You can turn the triad around different ways to make inversions, but this doesn’t change what the triad is called. For example, if we have the notes E G C it is still a C Major triad, but now it is in first inversion because the C note (the root) has been moved to the top of the chord. If the bottom note of the triad is moved to the top it is still a C Major triad, but now it is in 2nd inversion and the order of the notes is now G C E. 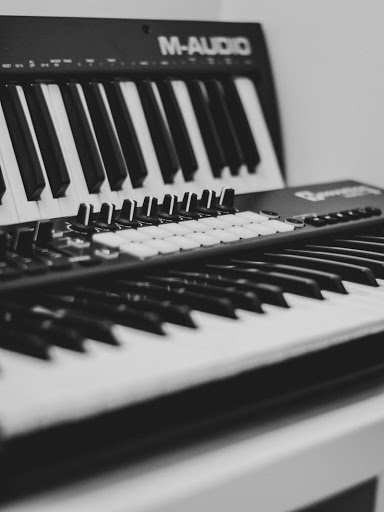 A Major Chord is the chord that is sometimes called the “Happy Chord”. It is made up of two intervals: a Major 3rd (+3) and a Perfect 5th (P5). This is the distance from the first note of the chord which the chord gets its name from. For example, a C Major chord would have the notes C E G. From C to E is a +3, and from C to G is a P5. In the example below the highlighted notes make up the C Major chord. 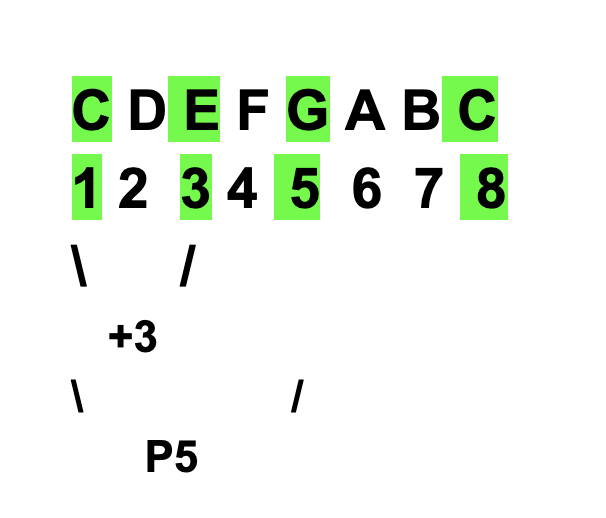 A Minor Chord is typically labelled as the “Sad Chord”. It is made up of two intervals: A Minor 3rd (-3) and a Perfect 5th (P5). A C Minor chord would have the notes C Eb G. From C to Eb is a -3, and from C to G is a P5. So the difference between a Major and a Minor chord is only one note, in fact only a semitone difference. That one little semi-tone however makes a huge distinction in the quality of chord’s sound. 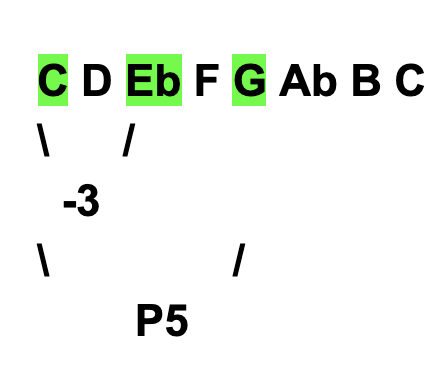 (using the notes in the minor HARMONIC scale, where the 7th note has been raised a semitone)

7th Chords are made up of 3 intervals, because they are comprised of four notes. They are a Major chord with a 4th note added in; the minor 7th interval. A C7 chord would have the notes C E G Bb. The intervals would be a +3, P5 and -7. A dominant 7th chord is called “dominant” because it is built on the dominant (5th note) of whatever key you are in. Note that in any Major key and it’s tonic minor (the minor key that starts on the same note, but would have a different key signature) the notes in the dominant 7th will be the very same. Let’s use F for example. In F Major with a key signature of just one flat (Bb) the Dominant 7th notes would be C E G Bb. In F minor with a key signature of four flats (Bb Eb Ab Db) the notes would also be C E G Bb. “E” is not flat because it is the 7th note, which is raised a semitone and becomes E natural. 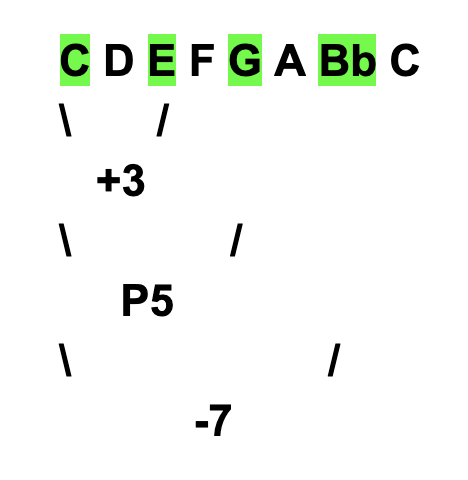 The Diminished chord consists of 3 notes. Each note is a minor 3rd away from the previous note. So a diminished chord built on C would have the notes C Eb Gb. Often this chord is used as a 7th chord and therefore would contain one extra note to make the 7th…Bbb (B double-flat). On the keyboard this note is usually named as A, and it looks like it is only a 6th up from C, but technically when it is named as a “B”…. in this case Bbb, it now presents itself as a 7th, a diminished 7th to be exact. Complicated, yes, but trust me on this one! 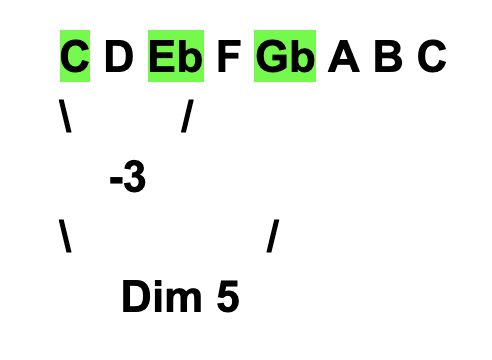 Watch this video to hear what both the diminished chord and diminished 7th chords sound like. 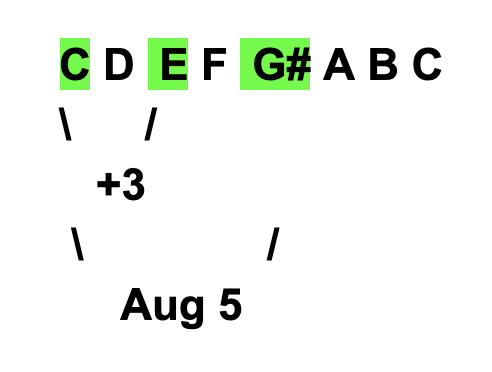 Listen to what the augmented chord sounds like here:

The chart below gives you the names of all the chords that occur in every Major key. 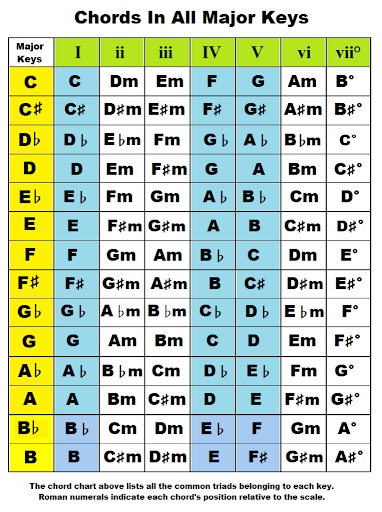 Captain Chords allows you to easily play and compose chord progressions. Try using our plugins to help you write songs and learn about music theory!