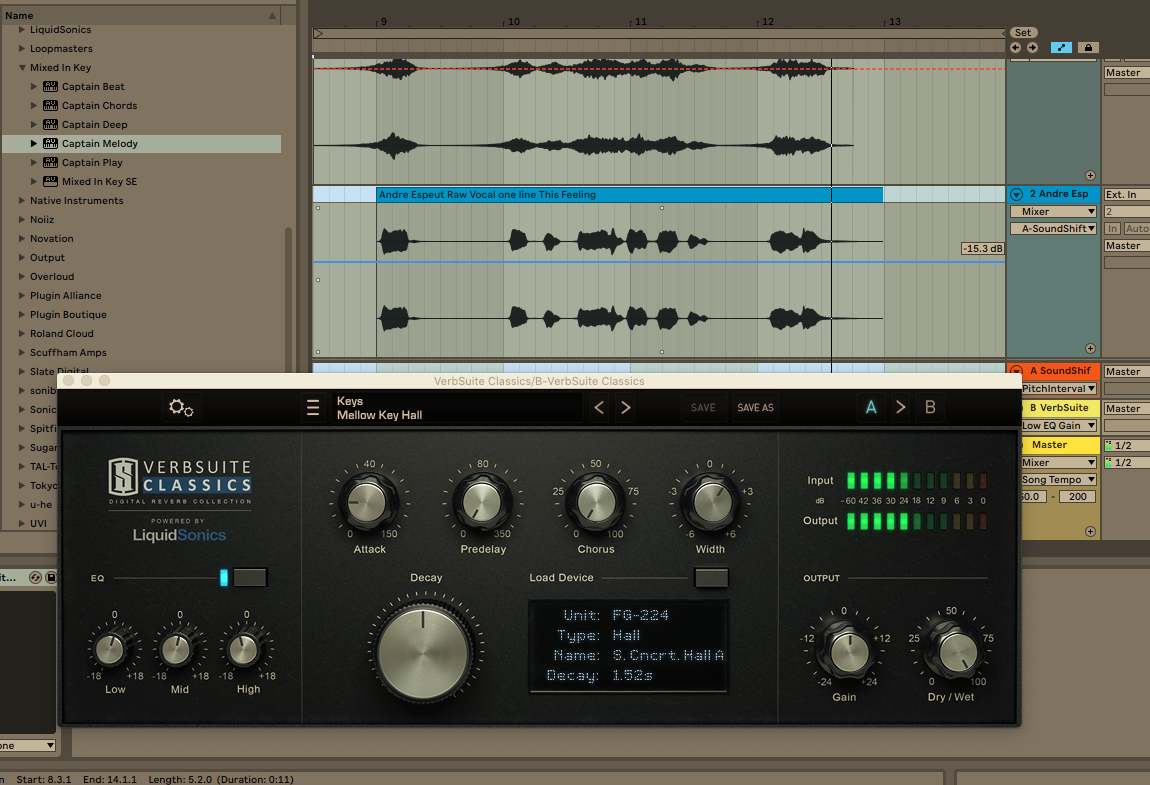 Reverb can be used to create some devastating effects that go far beyond emulating room behaviors. Here are 6 creative reverb techniques to enhance your tracks. 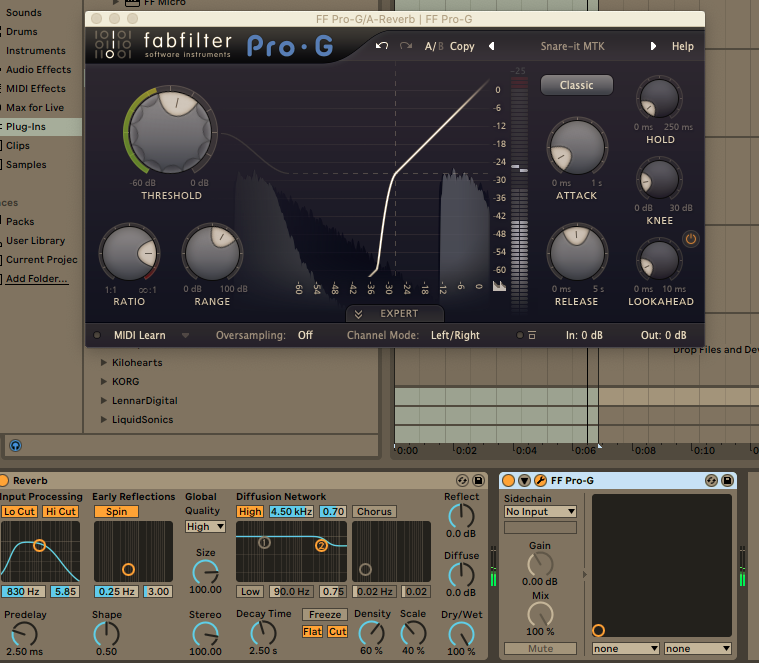 Made famous by Phil Collins in the 80s, gated reverb is synonymous with humongous sounding snares, as heard in countless rock classics. The same technique was also fundamental in the heyday of Dubstep. Producers used gated ‘verb to create colossal snares with super loud tails that would suddenly cut to silence. Powerful! Here’s how:

The Gate is deactivated.

With the Gate now active, the snare tail is thick and powerful, and cuts off much more abruptly to suit the drum beat.

This can be an effective way of bringing in new sections of a track, or spicing up vocals and cymbals, particularly. Choose a piece of audio, reverse it, and apply reverb to the reversed sound. The transients will be reversed, meaning the reverb affects the back end of the sound first. This can cause some hauntingly beautiful textures to appear, as if by magic.

Then, resample the reverb as its own audio track, and remove the original, reversed audio clip. Line up the newly created reversed reverb clip to fit the main vocal track and voila! You have a shimmering, ethereal reverse reverb effect! 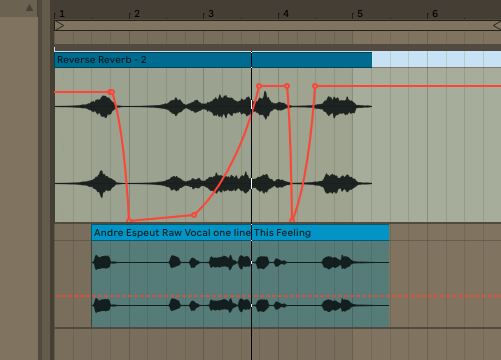 You may want to add more reverb to the resampled reverse reverb to glue it to the mix. You may also want to use it sparingly. For example, it may sound too weird over a whole vocal track, but might sound great at transition points, such as the end of a verse.

Processing the reverb with destructive effects like bitcrush can wildly affect the character of the reverb. Using a similar set up as for EQing reverb, add a bitcrusher or distortion plugin after the reverb unit. Then experiment with the destructive power! You may want to EQ the results to cut any nasty frequencies that enter the chain.

It may seem counter-intuitive, but compressing reverb tails is a dramatic effect. While it certainly won’t work on every track you write, it’s a powerful option to consider. Compressing the tail makes the quietest parts much louder, giving the reverb tail an industrial-strength boost. Check out how it dramatically affects the character of this bassline:

Here’s the bassline with some subtle reverb appliied…

And here, the same reverb is compressed – what a difference! 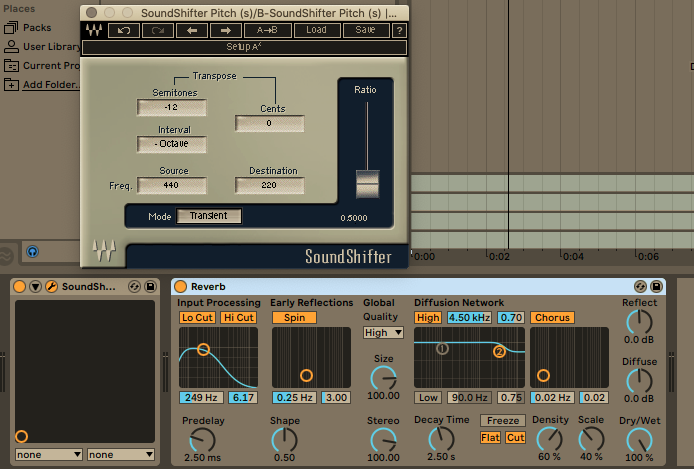 Another creative application of reverb could be to combine it with a pitch-shift effect. Insert a pitch-shifting plugin directly before the Reverb on a send channel, and shift the pitch up or down an octave. Lowering the octave can add thickness to vocals, while raising it an octave can give the impression of increased presence in chords.

This can work beautifully to accentuate particular moments or introduce different parts of an arrangement. By automating the reverb to behave differently at specific moments, you can create drama in your arrangement without needing to add any extra complexity to the track itself.

Try automating a boost in wet reverb or decay length at a specific point, such as the end of a verse or as part of a breakdown.

Here, the Wet amount of reverb is automated to increase towards the end of the vocal phrase:

There is, of course, much more you could automate than simple Dry/Wet amount. Try enabling ‘Freeze’ at various points. Freeze loops a snapshot of reverb at a consistent volume, which can be dynamic and exciting. Or, try automating between different reverb units entirely. You could automate octavised reverb to enter the effect chain at a certain point, or adjust decay times, filters and much more. In the long example below, several automation effects are applied at regular intervals throughout the phrase:

The automated effects are:

Did you spot when and where these automation points entered the effect chain? 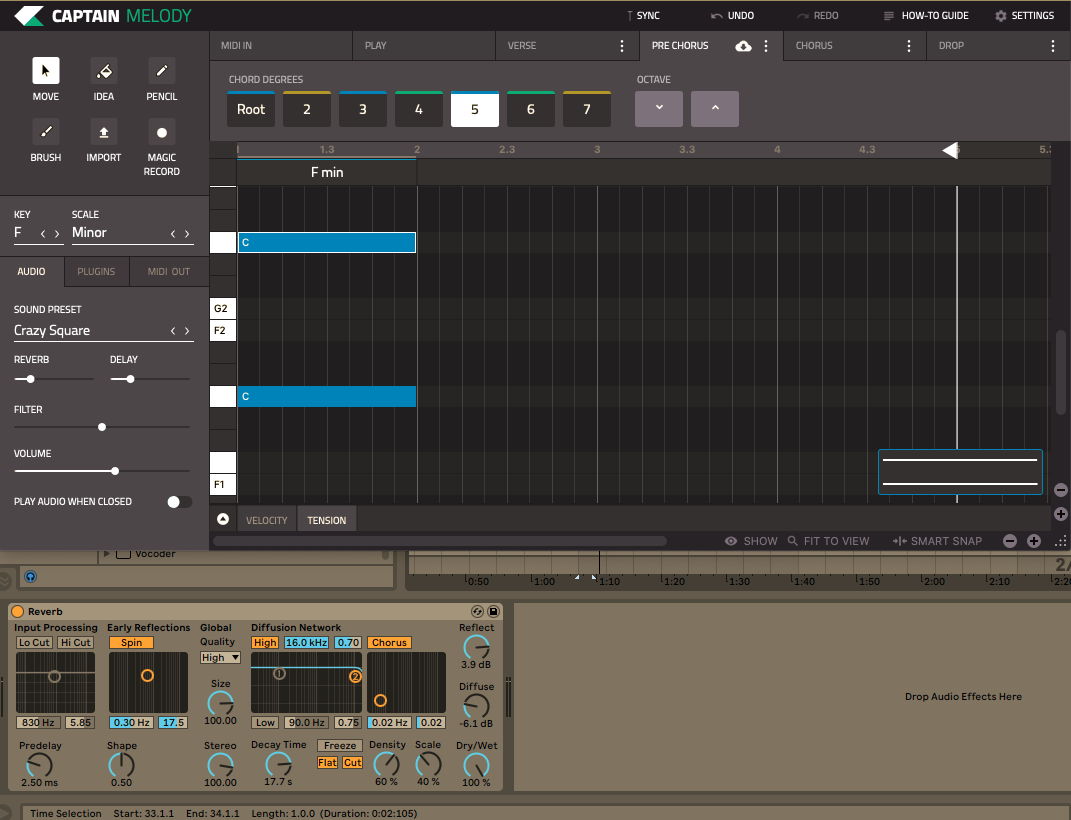 As alluded to in the automation example above, some reverb plugins have a Freeze function. This function takes a snapshot of the reverb tail and loops it, creating a new, consistent tone. It’s a great effect on its own and can be intensely dramatic, as heard in the above example.

You can take this a step further, and create a new instrument from frozen reverb tails. This works best with pitched instuments such as vocals, synths and other melodic instruments. 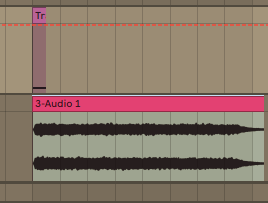 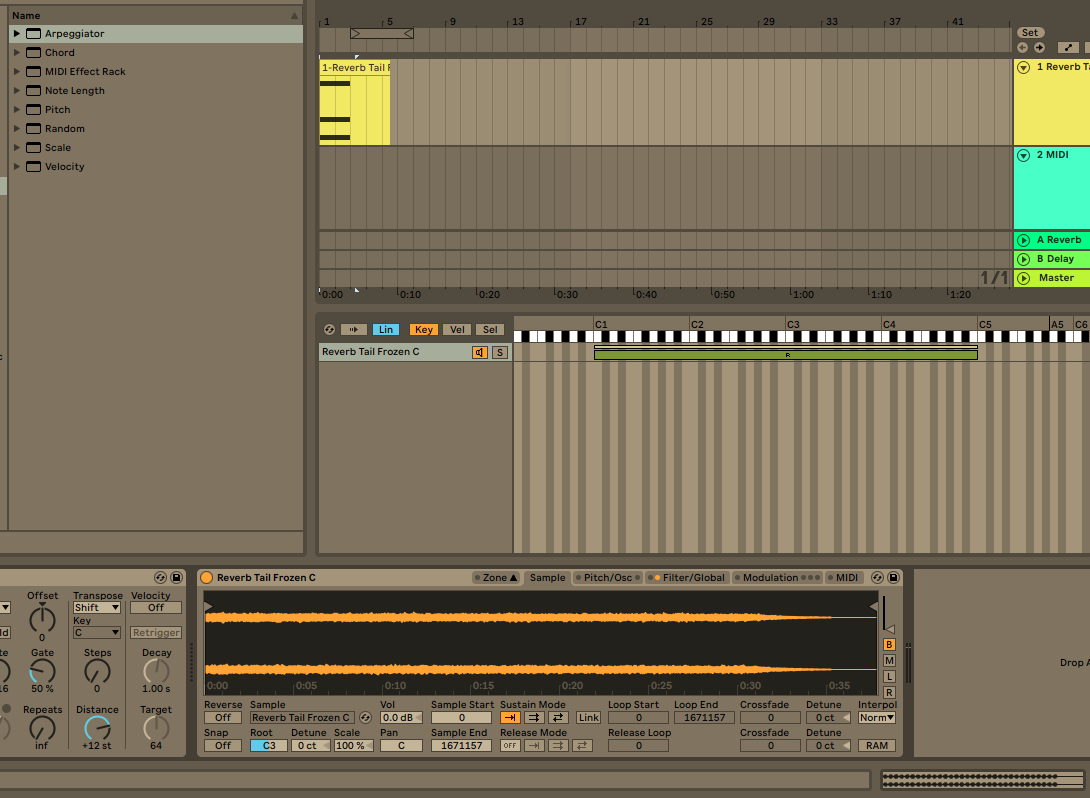 Ableton’s Sampler allows me to spread the sound across many octaves. Many other plugins and DAWs also offer this function, such as Logic’s EXS24 sampler.

The newly created instrument now has plenty of similarities to your original sound/sample, but is entirely made out of its reflections. This gives you the opportunity to counterpoint between the two or layer them together and create some interesting new textures!

Here’s a simple arpeggio created with the new instrument: